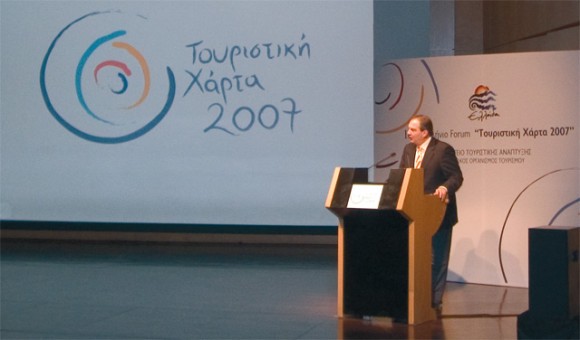 “Tapping the potential of the country’s tourism industry is one of the government’s top priorities”, PM Costas Karamanlis said during his speech at the opening ceremony of “Tourism Charter 2007” conference.

Aspiring investors in Greece’s tourism industry will at last be able to plan their schemes with much greater certainty, as a result of the first ever investment charter, Prime Minister Costas Karamanlis told the full house of tourism delegates recently. On opening the ‘Tourism Charter 2007’ conference early last month, he stressed that the industry holds the potential for diffusing prosperity widely.

“Our tourism industry is acquiring for the first time a targeted communication strategy and a special zoning plan,” he said.

The charter greatly helps investors to decide where and in which sector to invest, said the prime minister, as well as securing transparency and clarity in the terms of the undertakings. “Tapping the potential of the country’s tourism industry is one of the government’s top priorities,” he added.

“Tourism is par excellence the industry of decentralization, of sustainable and balanced development. It is one of the strongest tools we have for evening out regional inequalities, bolstering a large number of related economic sectors and diffusing prosperity throughout the country and society,” he said.

Development Minister Dimitris Sioufas noted that the absorption of investment subsidies in tourism under the EU-sponsored Competitiveness program rose from just 8 percent in March 2004, when the government took office, to 70 percent in December 2006. More than 6,050 investment schemes in tourism have been approved under the program, their budgets totaling 780 million euros. He added that government advertising outlays for Greek tourism have risen by about 400 percent in the last three years.

Deputy Finance Minister Petros Doukas focused on efforts to develop golf courses in Greece, which he said would be made possible with the introduction of the general zoning plan. He noted that whereas Spain, Ireland and South Africa have about 400 golf courses each, Greece has only six.

Tourism Development Minister Fanni Palli-Petralia said the 2007 tourist season looked more upbeat then ever, but “We cannot stand by and watch the trains of development pass… Greece has to become a 12-month destination.” She added that preliminary figures show that nearly 16 million tourists visited Greece in 2006, a 10 percent increase from the previous year, the tourism minister said.

The tourists spent an estimated 12 billion euros last year, also an increase of 10 percent from 2005. Official figures on tourism for 2006 have not yet been released.

“Tourism is a blood donor for the Greek economy, contributing 1 billion euros to the national economy monthly… 2006 was a very good year,” she said.

The government plans to spend more than 40 million euros on its advertising campaign to promote Greece as a holiday destination – with international television ads taking up most of the cost.

Government officials say private and public infrastructure improvements for the 2004 Olympic Games in Athens have helped attract more visitors, as well as a general regard by travelers of Greece as a safe destination.

Addressing the same event, Tourism Minister Fanni Palli-Petralia announced the creation of a 35-kilometer promenade and cycling route along the capital’s southern coast, running from the Peace and Friendship Stadium to Varkiza.

In a similar vein, a group of eight non-government organizations have got together to launch a series of bike-riding trips in 13 cities across the country in a bid to get Greeks peddling.