A recent survey by the Marc group, which was ordered by the Greek National Tourism Organization, shows that tourism services in Greece are on at least the same level as those of the rest of Europe, but quality-price is not. The survey was completed in mid January and concentrated on the Attica region. Some 1,200 men and women were surveyed.

The survey shows that 52% of those questioned consider Greek tourism services good, while 37.4% considered them fair and 8.8% not satisfactory. In comparing Greek tourism services with those in the rest of Europe, 42% of those questioned believed that local services were just as good, while 10.1% said that local services were better than those in Europe. Some 30% considered the local quality worse than the rest of the continent.

As well, the survey found that most were satisfied or more than satisfied with the country’s natural environment, its historic sites, the many and varied forms of entertainment available and the general feeling of safety felt by the traveler and at the airport.

However, of all that has to do with the quality of tourism services, the lowest percentage of satisfaction came regarding the quality-price ratio.

Nonetheless, the survey found that most were confident for the future of Greek tourism. A mere 11.7% said they felt the sector had not improved since the holding of the 2004 Olympic Games.

For the future, those surveyed said that the tourism ministry must advertise Greece abroad, must push to increase the quality of services, and must work to develop a tourism conscience for the local residents. 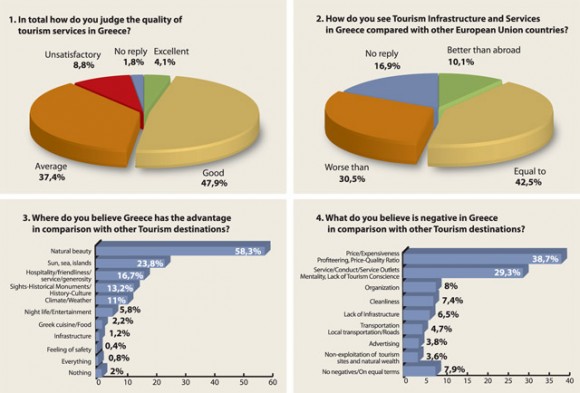 The survey shows that tourism services in Greece are on at least the same level as those of the rest of Europe, but quality-price is not.