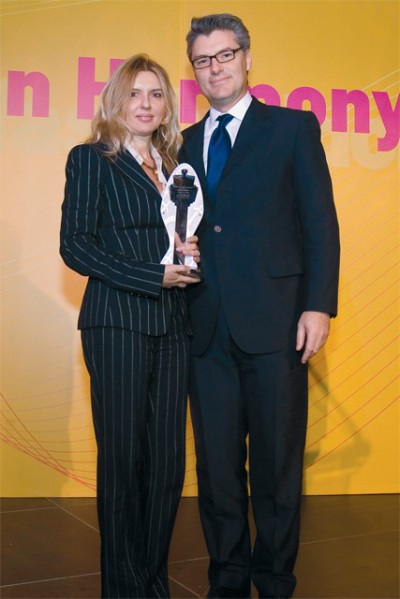 Besides the local award as Best Performing New Airline, Qatar Airways picked up numerous other awards recently including the Best Airline in the Middle East by readers of the U.S. magazine Global Traveler. In our photo, Athens Airport Deputy Chief Executive Officer Dr. Yiannis Paraschis handed over the award to Qatar’s area manager for Greece, Morena Bronzetti.

The annual Airline Marketing Workshop, organized for the seventh consecutive year by Athens International Airport (AIA), was highlighted by the special awards presented by AIA to the airlines that recorded the highest passenger development in 2006, in recognition of their contribution to the airport`s overall record growth of 15.1 million passengers, a result surpassing the 2005 volumes by a significant 5.6%.

As every year, the 7th Airline Marketing Workshop was a unique opportunity for direct communication between the airport company and the airlines, in relation to issues such as the yearly activities` review, incentives for airlines, latest developments, new challenges in the air transport sector, etc. On this occasion, Athens International Airport presented special awards to the fastest growing airlines for 2006, in the categories of geographical region, thin route, best performing newcomer, and best of the top-10 airlines.

“Market Overview 2006”, and “Responding to demanding operational cases”, were among the issues presented during this year`s workshop, whereas AIA, for the first time, included a new awards category in order to promote and award personal contribution in the aviation industry.