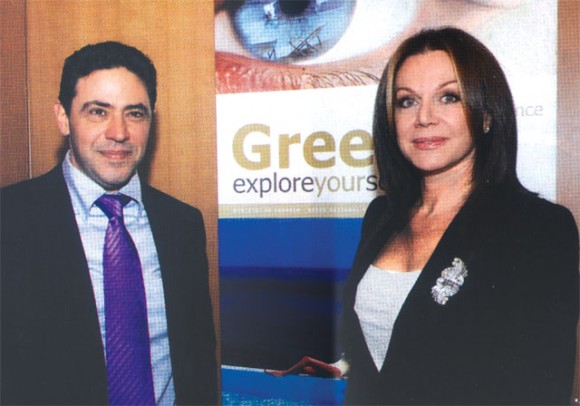 With distinct hopes of breaking last year’s record number of tourism arrivals (up 10 percent over the year before), Greece launched its 40-million-euro advertising campaign (run by the consortium Ashley & Holmes Athens/Karamella) at a gala dinner last month. The campaign, with the motto “Greece: Explore Your Senses,” is targeted at 1 billion people worldwide, according to Tourism Development Minister Fanni Palli-Petralia.

“The concept,” said the minister, “is that Greece stimulates and creates all senses and gives a completely different experience in comparison with other countries. No other country can combine 3,000 islands, more than 5,000 years of history, enhanced and high quality of services, a different way of life and a salience place in the heart of the modern Europe.”

The campaign includes spots that center on all forms of tourism and its basic aim is to promote Greece as the ideal destination for holidays. Ads, spots and short films all highlight the multitude of tourism options in Greece and each tailors vacation options to a specific audience.

Mrs Petralia said that besides established markets, the campaign would address markets such as Russia and China. She said it would also place particular emphasis on making the most of all new means of communication (the successful cooperation with yahoo will continue in 2007) while following an organized promotion plan through regular advertising.

As well, in cooperation with the Hellenic Tourism Organization (GNTO), the ministry has planned Greece’s participation in about 100 international exhibitions. This year, however, the ministry said it would follow the pattern of rival destinations and would utilize events of international interest that include everything from commercial ventures to sports. A characteristic example mentioned was Europe’s prime club competition in basketball (also known as the Euroleague) with 220 games per year.

“The agreement we have signed with CNN International, which broadcasts in Europe, Asia and Africa, is very important for us,” explained the minister. “It will host more than 4,800 ad spots. GNTO will also be the sponsor of the new show ‘The screening room,’ which addresses a international TV audience with a high income.”

As of mid-January, other international channels carrying the advertisements will include Al Jazeera, BBC World, TV5, Fashion TV, the Travel Channel and CNBC.

In Germany, one of the key markets for Greece, the campaign will feature in that country’s major newspapers 42 times; in major magazines; such as Stern, Geo and Focus 27 times; in more than 4,500 billboards across 15 cities; on all German trains; on German TV channels through 130 advertising spots; and in professional publications 16 times.

Makis Seriatos, president of Ashley Worldgroup Southeastern Europe; and Agapi Vardinogianni, president of Karamella, presented the “Greece. Explore your senses” campaign. Mr. Seriatos said the films and spots were created to entice personal feelings and we believe that Greece can do exactly that for each and every visitor.

Agapi Vardinogianni, president of Karamella, said that the picture of modern Greece worldwide, thanks to the Olympic Games held here, is one of safety and friendliness within a country with modern infrastructure and new technology, all of which are valuable for tourism development.

Tourism and the Future of the Greek Economy