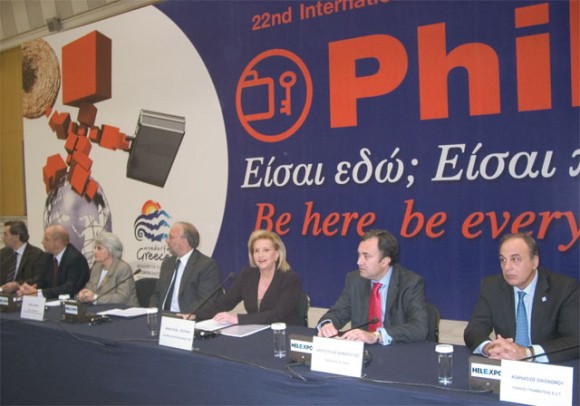 Aristotelis Thomopoulos, president of Helexpo, the organizer of the Philoxenia International Tourism Exhibition, says this year’s fair, the twenty-second, saw an increase in visitors and exhibitors (additional exhibitors this year included those to the new special section for spa products, which was added to the Hotelier pavilion).

Most travel professionals at the fair, however, appeared surprised by his observations. Their most common remark was that “it seems to get worse every year, but we keep coming.”

The president went on to say that visitors came from the whole of Greece and 15 other countries, namely Albania, Austria, Bulgaria, Cyprus, the Czech Republic, Denmark, France, Germany, Hungary, Latvia, the Netherlands, Portugal, Serbia & Montenegro, Turkey and Ukraine – all the aforementioned countries were represented at a stand; either on their own or in cooperation with local associates.

And at a press conference given by Tourism Development Minister Fanni Palli-Petralia, the minister praised Helexpo (many of the fair’s employees went on strike the first day of the Philoxenia) and its president for organizing an “exceptional fair.”

She went on to elaborate on the priorities and the overall developmental strategy of her ministry, which would eventually secure Greece a top place in world rankings. Greece is a year-round tourism destination, she said, and cited the scale of the country’s tourism wealth and the prospects it offers.

She also said the ministry was going ahead with its promise to create a Hellas Tourism Observatory and a Hellas Satellite Account method for the country’s tourism data. The project is a long term one.

As well, she said investment in tourism is higher and more extensive than ever and tourism is at the focus of governmental policy; “A policy that aims at the arrival of more tourists and an increase in tourism exchange currency, as well as its dissemination in all sectors of the economy.” 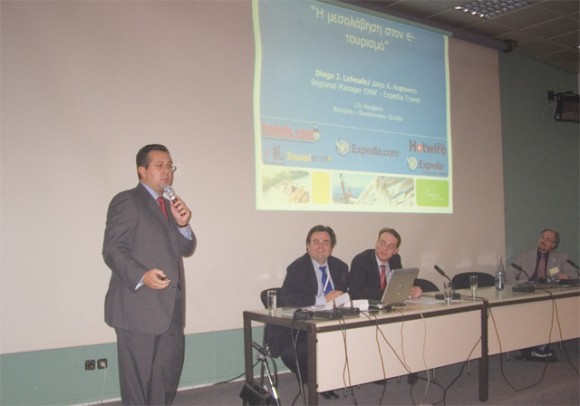 Expedia’s regional manager for the Eastern Mediterranean and Africa, Diego Lofeudo; Dr. Dimitris Buhalils, a tourism marketing specialist; and Yiorgos Cheretis, the youtravel.com representative in Greece, during the Philoxenia conference on etravel.

Within the framework of the new Philoxenia Spa exhibition, which failed to attract a barrage of exhibitors, the fair organizer supported a scientific and entrepreneurial conference on the special market this form of tourism represents. Speakers analyzed the trends of the global spa market, the requirements of tour operators and customers, and referred to specialized markets and successful examples, while noting the natural advantages of our country and the investment – mostly in hotels – made in this sector.

And although such conferences in the past have been poorly attended, this year the spa conference and a conference on tourism and the Internet, were packed.

Other side events included press conferences by the various prefectures exhibiting at the fair. For example, representatives of hoteliers of the municipalities of Zakynthos elaborated on the alternative forms of tourism in their prefecture. Among these are diving tourism, sea tourism, trekking, eco-tourism, agro-tourism and educational tourism, related to the presence of the Caretta-Caretta sea turtle in the region. As stressed, although this year was particularly hard for the island, due to earthquakes, there was a 5% increase at the end of the year, while even greater tourism traffic is expected in 2007.

This goes hand in hand with recent projections by tourism professionals. They say tourism revenue this year will reach 13.7 billion euros – a sum equal to more than all of Greece’s exports – which is 10% higher than that of last year, as is the total number of arrivals expected this year.

The Hosted Buyers Program that took place during Philoxenia, for the second year running, was considered especially successful. According to the organizers -Helexpo and Travel Media- there were 4,410 registered meetings with 89 buyers from 20 countries.

A disappointing event at the fair centered on the International Symposium on Cultural Tourism, organized by Helexpo in cooperation with the Alexandrion Technological Educational Institution of Thessaloniki. Speakers from home and abroad gave an excellent overview on cultural tourism and its importance to Greece, but the conference was sparsely attended. Sad, since culture is an economic activity that is vital to a small country like Greece with a dearth of exportable resources and an abundance of cultural treasures. 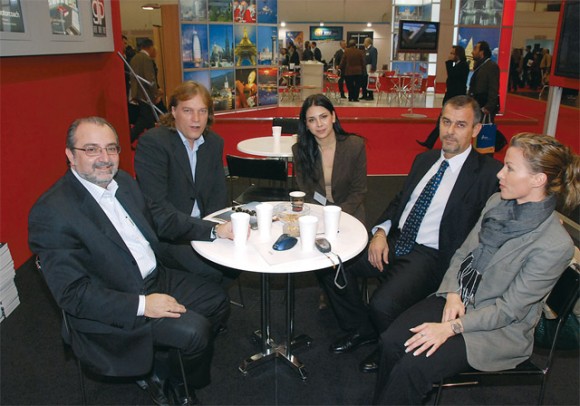 Recently, an extensive report by the European Commission has measured and evaluated how much each EU member state has converted its cultural resources into an economically active product. The result for Greece is disappointing, with the country coming close to last on the list.

The added value of the Greek cultural product is just one percent of its GDP, the third lowest in Europe, and less than much smaller countries such as Cyprus, Luxembourg and Malta. At the other extreme, France draws 3.4 percent of its GDP from culture, which corresponds to more than 80 million euros, or more than 10 times the amount for Greece.

The Commission employed a fairly broad definition of culture that includes, along with museum and archaeological sites, activities such as cultural tourism, the sale of cultural products, theater and dance, publications, audiovisual material, and even architecture.

Using that broad definition, the report estimates that Greece employs almost 100,000 people in the culture sector, a relatively high number by European standards. But the economic output is way out of proportion. What is not lacking is the cultural heritage, which in Greece absorbs 50 percent of total state funding for culture, a proportion similar to that in France and Italy. 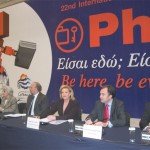 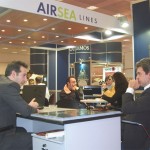 Air Sea Lines’ sales and marketing manager, Michael Assariotis, discusses the company’s future with Vangelis Stavropoulos of Piraeus-based Hydra Travel. AirSea Lines/Pegasus Aviation began service from Patras to Kefalinia and Lefkas on November 13. By adding service to these two islands, the carrier’s seaplane service will cover all the Ionian islands. 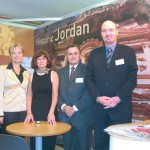 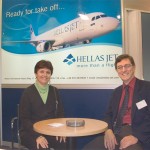 Nikos Spyridakis, commercial director for Hellas Jet with his spouse, Christina. The company, now fully owned by Dimitrios Marantos of AirMiles, intends to begin scheduled flights to Western European destinations as of May first. 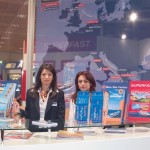 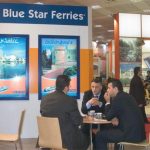 Dionissis Theodoratos (center), commercial director domestic lines for Blue Star ferries. The company released its financial statement for the first nine months of this year where revenue was up 4.6% to reach 113,282,000 euros and net profit for the period was up 16.5% against the same period last year to reach 22,412,000 euros. 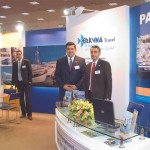 Paros-based Erkyna Travel set up an impressive stand and manned it with professionals at this year’s Philoxenia. In the center of the photo is the agency’s manager, Dimitris Petropoulos. 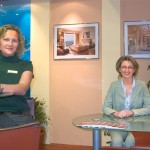 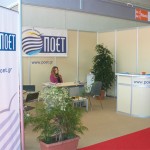 Representing the Panhellenic Federation of Tourist Enterprises (POET) at the Philoxenia fair this year was Athina Katasamani. POET, which has as its base the country’s tour coach owners, represents some 12 Greek travel associations that are spread throughout the country. 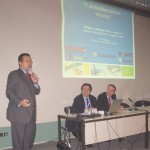 Expedia’s regional manager for the Eastern Mediterranean and Africa, Diego Lofeudo; Dr. Dimitris Buhalils, a tourism marketing specialist; and Yiorgos Cheretis, the youtravel.com representative in Greece, during the Philoxenia conference on etravel. 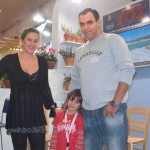 The Ios stand received additional promotional assistance this year during all the days of Philoxenia as the island’s promotional specialist, Kostas Rodopoulos, was accompanied by his wife and daughter. 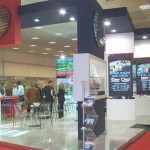 Minoan Lines, which received a Philoxenia award this year, is in the news as being the ferry line that will soon release news on its future and its business activities. Rumors abound that the company will announce a change in major share ownership with Pericles Panagopoulos (Superfast) and Panos Laskaridis (Hellenic Seaways) the major players in the script. 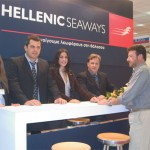 A strong staff was on hand at the Hellenic Seaways stand this year. From the left: Katerina Platsa; Stathis Vraxnos, the line’s sales representative; Ioanna Kontarini, the company’s marketing and advertising manager; Ilias Bekaris, Hellenic’s sales coordinator; and their man outside the counter is the company’s port coordinator, Vangelis Karnesis. 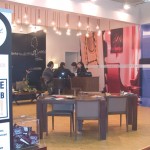 Les Lazaristes, directly opposite one of Thessaloniki’s major art centers, is well known for its artistic character and that tendency was carried on at this year’s fair with the stand portraying an artistic bent. 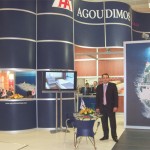 Agoudimos’s sales and marketing manager Georgos Roumeliotis welcomed a barrage of consumers checking out the new season’s schedules. As well, travel agents dropped by to compliment management on the FAM cruise the line held for provincial travel professionals this past summer to Bari on the renovated Ionian King and Ionian Queen ferries. 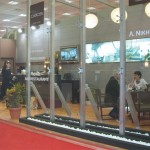 Daios Luxury Living Hotel picked up the Helexpo award for “Best Creation,” which was one of the best of just 68 awards handed out during the fair’s opening ceremonies. 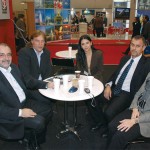