Qatar Celebrates A Year of Success in Greece 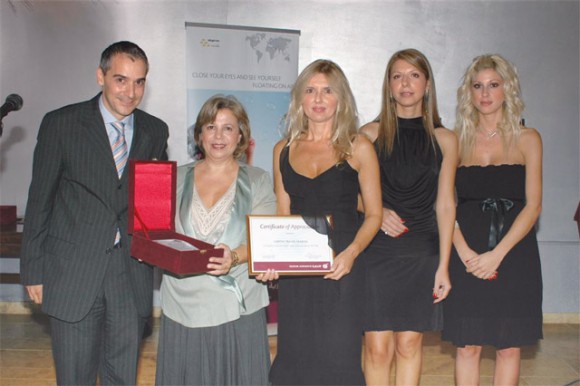 To celebrate more than one year of successful operation in Greece, Qatar Airways hosted its First Travel Agent Awards (2005-2006) ceremony, which was followed by a dinner and show. More than 300 guests from the travel industry, as well as special guests from show business attended.

Qatar Airways granted awards to travel agencies in the three most important activity areas for the airline, leisure travel, business travel by the shipping industry and general interest travel. The awards for these categories went to Heronia Travel, Griffin Travel and Aktina Travel, respectively.

Meanwhile, at yet another ceremony, Qatar Airways welcomed its first Airbus A340-600 HGW (High Gross Weight) aircraft, becoming the launch customer of the world’s longest passenger jet. The 266-seat aircraft, capable of flying non-stop between Doha and the east coast of the U.S. with a full load of passengers and cargo, was welcomed with a fireman’s salute at Doha International Airport.

The new aircraft also sported the airline’s new livery, its entire tail fin painted with a much larger image of an oryx in the corporate burgundy color.

Akbar Al Baker, CEO of Qatar Airways said, “we are the world’s first customer of this type of aircraft capable of flying with a full load of passengers and cargo for up to 14 hours non-stop.”

The new aircraft has a three-class cabin layout with innovative onboard features such as dedicated first and business class lounges and live television. The dedicated first class lounge has a stand-up bar with drinks rack, mood lighting, leather sofas that can seat six, and teak tables.

Also, Qatar Airways is the first international airline to provide live streaming of several channels to seatback TV systems. Live television was introduced this summer on selected Airbus A330 aircraft operating within and between the Middle East and Europe.

Mr. Al Baker said, “Qatar Airways is entering a new era. We are a confident and progressive airline which is why we are unveiling a bold new look and new onboard products that help project us as a more powerful brand.”

The airline has ordered ten A340-600s to be delivered over a two-year period. The aircraft will operate on long-haul flights to points in Europe, the U.S., the Far East and Australia.

As a final note, in Dubai last month, Qatar’s Civil Aviation Authority and Qatar Airways participated in the annual Routes conference and exhibition. At this premier airline and airport event that focuses on the development of international service, a stand at the exhibit showcased the new Doha International Airport, scheduled to open in 2009. The new airport, billed as an architectural icon of the Middle East, is the region’s first airport built on land reclaimed from the sea.

The new airport will be Qatar Airways’ new home. Today, the carrier serves more than 70 international destinations with a fleet of 49 modern aircraft.

By 2015, Qatar Airways plans to expand its service to more than 100 destinations and its fleet to 110 aircraft.
Abdul Aziz Al Nuaimi, chairman of Qatar’s Civil Aviation Authority and the new Doha International Airport Steering Committee Airport, said, “The new Doha International Airport will be a key economic driver of the State of Qatar and, together with the rapid development of the national airline Qatar Airways, will continue to help put the country in the global spotlight.”