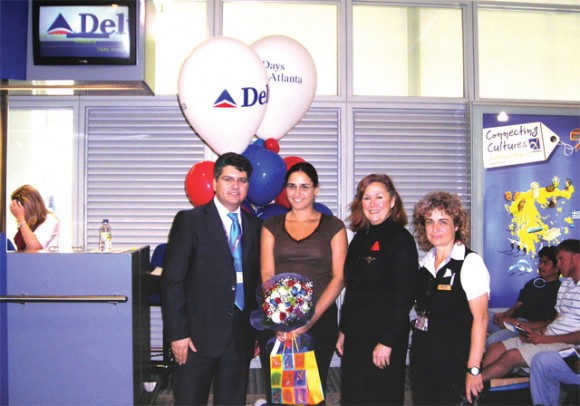 Delta Air Lines celebrated its 100th day anniversary for its non-stop service from Athens International Airport to Atlanta, Georgia. To date, the flight, which began in May, has provided service for more than 37,000 customers. The daily flight, aboard a Boeing 767-300ER aircraft, can carry 214 passengers in a two-class configuration that features Delta’s BusinessElite service.

Dimitris Karagioules, Delta’s commercial director for Greece and Cyprus said, “Delta is the only U.S. carrier to operate direct, non-stop service from Greece and the new flight is already running with an average load factor of 91 percent. Both business and leisure travelers are taking advantage of our competitive fares, that allow them to connect to more than 127 cities from Atlanta, the world’s largest airline hub.”

Delta offers service to more destinations than any global carrier with service to 292 destinations in 46 countries. With more than 50 new international routes added in the last year, Delta is America’s fastest growing international airline and is the world’s leading carrier between the United States and destinations across Europe, India and Israel with flights to 29 trans-Atlantic destinations.

Delta is a founding member the global SkyTeam airline alliance that allows customers to earn and redeem SkyMiles on more than 14,000 flights offered by SkyTeam and other partners. Through SkyTeam and worldwide codeshare partners, Delta offers flights to 461 destinations in 96 countries.