Domotel and its hotels, Les Lazaristes in Thessaloniki and Xenia Voulou, are sponsoring the Thessaloniki beach volleyball team, which stars Mariana Hounda and Mara Lazaridou. Last month, the team placed fifth in a competition held on Mykonos, and went on to compete on Kerkyra. From there, the team will travel to Marseille, France to compete in the World Competition. Domotel’s company aim is to provide high-level services with a client centered approach. Les Lazaristes is the first hotel developed by Domotel. 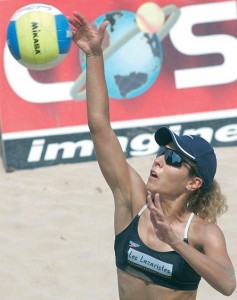 Mariana Hounda, one of the players of the sponsored team.