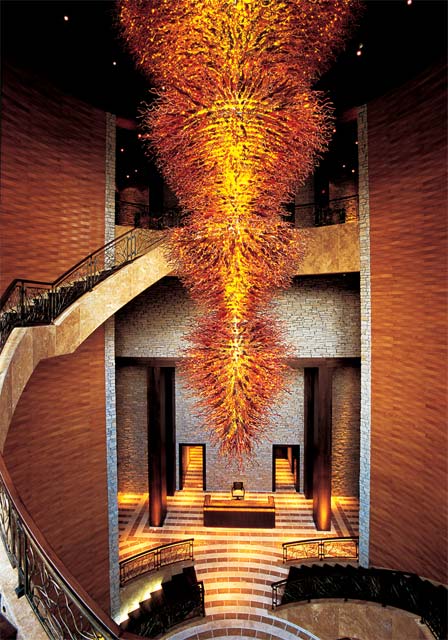 The hand-blown glass chandelier by artist Cernovska Miroslava that decorates the base station lobby.

Completion of the first phase of renovations at the Regency Casino Mont Parnes was celebrated last month with an opening for the new high-tech cable-car system and luxurious new base station.

Established in the mid 60s, Mont Parnes was the first casino to operate in Greece. Currently, the casino is 51-percent-owned by the state with the remaining 49% controlled by Hyatt Regency Hotels & Tourism (Hellas) S.A.

Access to the casino, which is situated at the top of Parnitha Mountain within the National Park, is facilitated by cable car.

Vasilios Xenikakis, board of director’s president of Hellenic Casino of Parnitha, said that the new cable car system was completed in a record 11 months at a cost of 34 million euro. He said that the new system will be “a main attraction for Athenian residents and visitors, and will also reduce traffic and pollution within the park area.”

The new cable cars, made by the world’s leading cable car company, the Austrian firm Doppelmayr, feature the latest technology and fine interior appointments. The new system can transport 2,500 passengers every hour, and can operate under all weather conditions, including winds gusting to 120 kilometers.

The two-story base station, designed by the international architectural firm Hill Glazier Architects and Hirsch Bedner Associates, has a cut-stone facade with tall rectangular windows. The interior is decorated with a collection of modern art by Greek and international artists. A dramatic ten-meter-long chandelier made from thousands of pieces of hand blown-glass hangs above the lobby. Parking at the station can accommodate 1,500 cars. 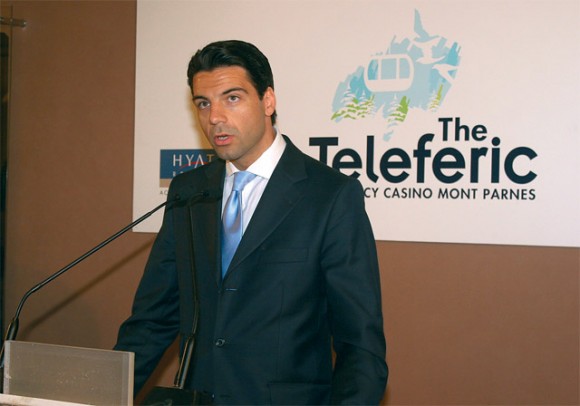 Georgios Galanakis, Hyatt Regency’s board president, commented that the success of the project’s first phase provides proof of the excellent cooperation between a public and private company. He closed by saying that he hoped the necessary permits to complete all the renovations planned for the complex would be issued. “This project, an investment of 140 million euros, will add significantly to the country’s tourism infrastructure,” he added.

Nikos Stathopoulos of BC Partners, one of the largest private equity investment companies in the world and the owner of 51.7 percent of the shares in Hyatt Regency, reiterated the importance of the renovation project for Greek tourism but also pointed out that is would serve as a catalyst for foreign investment in Greece.

“Our investment clearly indicates our interest in the Greek market. We hope the government supports this significant restoration project, and thus increase the trust foreign investors have in Greece,” he said.