As a result of the renewed interest in religious tourism, and in particular history of Apostle Paul in Greece, the neglected archaeological site of Corinth will receive the official attention it deserves as part of a religious tourism program developed by the 21st Ephorate of Prehistoric and Classical Antiquities.

Two important restoration projects designed to lead visitors “in the footsteps of Saint Paul” have received the approval of the Central Archaeological Council, though no timetable has been set for their implementation.
One program will highlight the ancient port of Kechries, while the other will restore the altar where Paul preached, which is a complex work of architecture made of marble situated in the center of the upper market. It dates from the middle of the 1st century AD.

The altar, which is in the shape of the Greek letter pi, was on a rectangular plinth measuring 15.50×20 meters and 3 meters high and was flanked by two unroofed waiting areas with desks. Roman officials made their speeches in this public ceremonial space, where they took Paul when he was accused by the Jews of Corinth of preaching sermons that undermined Mosaic law. The administration eventually ruled that he had not committed a crime against Roman law and was thus acquitted by Proconsul Gellius.

Interest in Saint Paul was perked throughout the country recently with the first-ever student competition titled, “Apostle Paul: Apostle of Greece – Apostle of Europe,” which was organized by the Holy Synod of the Church of Greece. An award ceremony was held last month for the 700 students that made up the 110 teams whose projects received distinction. 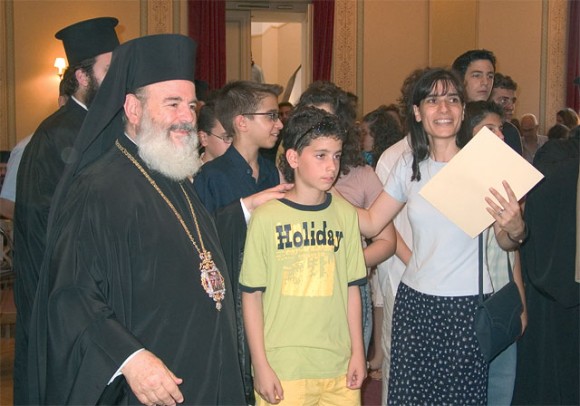 Archbishop Christodoulos congratulating a student and teacher from the Avgoulea-Linardatou School of Peristeri in Attica.

Georgios Kasimatis, director of Greece’s European Council representation office, headed the thirty-member committee that evaluated the projects. Mr. Kasimatis spoke enthusiastically about quality of the work and the range of media used.

“There were essays, icons, drawings, photographs, mosaics, even a play, musical compositions, documentaries, poems, board games, CDs and DVDs,” he said.

“The projects were graded on a five-point scale beginning with good and on up to excellent,” Mr. Kasimatis explained. All of the student projects submitted for the competition will be made into a CD/DVD. An initiative of the Synod’s Pilgrimage Routes office, the competition drew 6,000 students from primary and secondary schools throughout Greece. Teams were made up of up to ten students, whose participation was voluntarily, and a teacher. Teams had six months to prepare and submit their projects before the May deadline.

At a press conference before the award ceremony, Archimandrite Spyridon Katramatos, secretary of the Synod’s Pilgrimage Routes office discussed the church’s interest in promoting visits to religious and pilgrimage sites as an important form of alternative tourism. Many religious sites are unique to Greece, he said, such as Meteora, Mount Athos, and the churches dedicated to the Virgin Mary on the islands of Tinos and Paros.

Archimandrite Katramatos explained that the Synod chose Apostle Paul for the competition because the “Apostle is an ambassador. He began preaching in Greece and went on to Europe spreading a message of understanding, love and cooperation that is diachronic and completely relevant today.”

According to Archimandrite Spyridon Katramatos the book titled “The Footsteps of Saint Paul,” originally published in five languages, will now be republished in eight languages through the support of the Greek National Tourism Organization. The book covers Saint Paul’s route from northern Greece, ex. Zagora and Samothraki, all the way to Crete.

The Human Factor in Tourism and Shipping