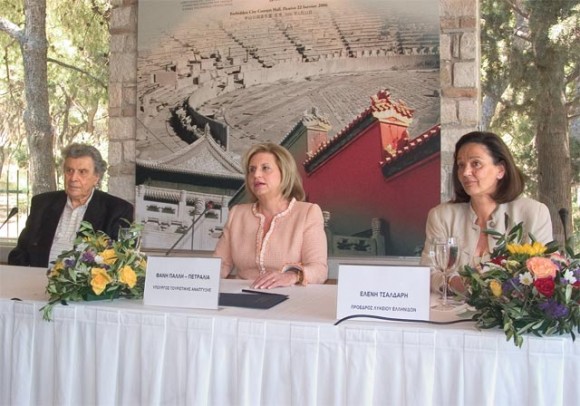 The renowned composer Mikis Theodorakis with Fani Palli-Petralia, minister of tourism development and Eleni Tsaldari, president of the Women’s Lyceum.

The music of Mikis Theodorakis and Greek traditional folkdances were performed at the third Beijing International Tourism Exhibit (BITE) last month, during which Greece was the honored country.

Before leaving for Beijing, Fani Palli-Petralia, minister of tourism development, said Mikis Theodorakis was selected to represent Greece with a concert by his orchestra in the Forbidden City. Ms Petralia described the composer’s music as “a well of light in dark times, his songs simultaneously political and poetic serve as the medium of ideals, values and dreams.”

Mr. Theodorakis said he was greatly honored that his music was selected, and that he had never imagined his music would be played in the Forbidden City, and that Mao, though deceased, would have a chance to hear his music as they fought for the same ideals. A selection of his popular and symphonic pieces were played, providing a sampling of his music inspired from different historic periods, such as the Opera of Antigoni a salute to the ancient poets Aeshylos, Euripides, Byzantine hymns, and a song to one of Kavafi’s poems.

Eleni Tsaldari, president of the Women’s Lyceum, said the traditional dances selected were representative of each region of Greece and their distinctive costumes, a selection which should enthuse the Chinese.