The brilliant-white, cube-shaped homes and bluegreen seas of Mykonos island are among the most popular images of Greece’s island tourism.

But Mykonos also is known as a favorite getaway of the wealthy and eccentric, for celebrities and the international jet-set, and for artists and writers. Over the past thirty years, Mykonos has developed into a cosmopolitan resort destination featuring some of the most sophisticated hotels, restaurants, shops and nightlife in Greece. 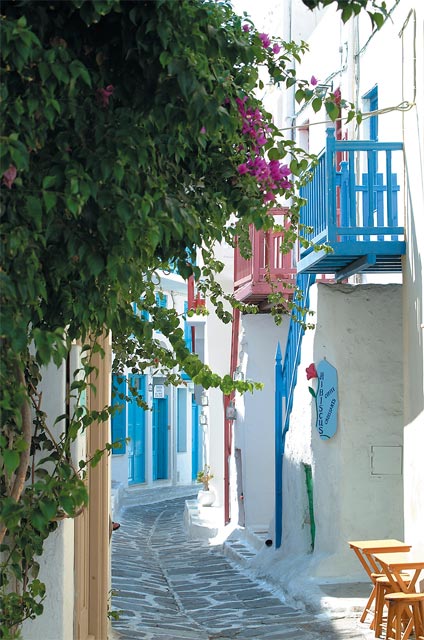 One of the unique cobbled streets of Mykonos town.

Tourism powers the island’s economy and has influenced its growth and development. The focus on upscale tourism has made it one of the most expensive islands in the Cyclades in terms of hotels and services, and real estate prices are high.

Giannis Armacolas, manager of Windmills Travel & Tourism, explains that the good quality of service offered on Mykonos has been very important for attracting and maintaining tourism on the island. In recent years, he says, “tourism has really increased and in particular the demand for the very top quality hotels with 5-star ratings.” Mykonos’s collection of 5-star hotels, says Mr. Armacolas, are truly luxurious and offer great service and excellent amenities. They are some of the best hotels to be found in Greece. In fact, Mr.  Armacolas points out, “about 50 percent of my customers specifically request 5-star hotels over 4-star properties. Demand is so high that it is very difficult to find enough 5-star rooms during the busy summer months.” He also notes that the high prices of hotels, services and restaurants tend to discourage the budget traveler.

Mykonos first attracted visitors as a stopover on their way to see the archaeological remains on the nearby island of Delos, which was an important commercial and religious center during the classical period.

During the early 1930s, the island’s beauty and architecture attracted artists, the affluent and politicians, most of whom came from Europe. Tourism development really took off after the Second World War.

In the late 70s, Lawrence Durell wrote, in his book about the Greek islands, that tourism was starting to overwhelm the island, but that it was too special a place to be missed. He described the main town’s labyrinthine streets, the white arcades and chapels, the extravagant wooden balconies, and the incredible contrasts of light and shade.

Despite the development and large number of tourists, Mykonos town has managed to retain its charm.

Visitors wander through the maze of streets, shopping or searching for the Venetian kastro, the asymmetrical araportiani church, the windmills, and the Alefkandra or as it is better known the “Little Venice” quarter with its waterfront cafe-bars and art galleries. Visitors also come to enjoy the island’s many sand beaches that range from the family-oriented, like Platys Gyalos and Psarou, to the trendy party scene at Super Paradise beach.

“Last year was a good year,” continues Mr. Armacolas, “and this summer looks even better with as much as a seven percent increase in tourists.

” Nikos Arampatzis, owner and managing director of Mykonos International Travel Service, was also positive about this year’s tourism season, though his estimate was more conservative, an increase of between 2-5 percent in relation to last year. He also finds that cruises are up as much as 20 percent this year. 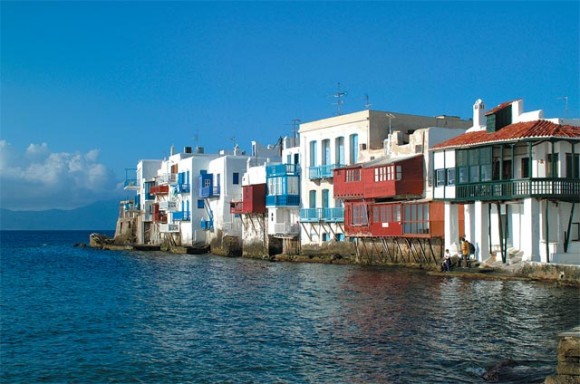 A view of the “Little Venice” waterfront.

These travelers visit the island as part of package tours that include three cities, such as Rome, Paris and Athens, or Rome, Athens and Istanbul.

Other agents specialize in the European markets with many charters flights arriving on Mykonos directly from, for example, Germany, Holland and Italy. Mr. Armacolas brings up the well-known fact that “the Italians, in particular, rule the island for one month, from July 25 through August 25, and that the demand is higher than the rooms available.” Mykonos is also a popular island for American tourists.

In recent years, Greeks have also become significant to the tourism market. The high-speed ferry service and airplanes, have made Mykonos an increasingly popular weekend destination, and Greeks come early in the season beginning from Easter and the feast day for the Holy Spirit. Mr. Armacolas says that the new trend is for Greeks to purchase or build private homes, or to rent villas for the summer, or to arrive as guests to one of those homes.

Mr. Armacolas concludes that mass tourism on the island is gradually being replaced by discerning individual travelers who prefer to plan and make their own travel arrangements.