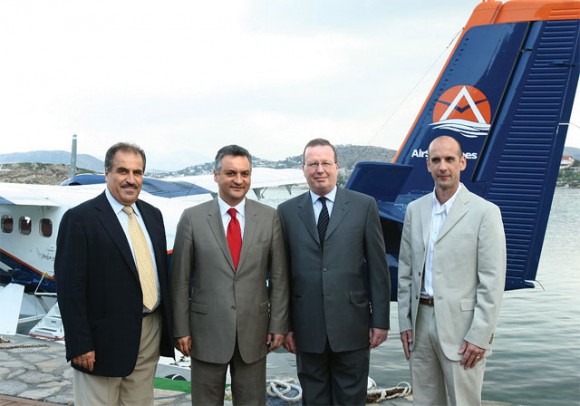 AirSea Lines representatives last month announced plans to invest over 100 million euros for the acquisition of 30 seaplanes to service its existing and newly planned bases in Greece.

Michael Patellis, president of AirSea Lines said, “the development plan we have for Greece includes creating a total of seven significant bases or ‘hubs’ with numerous smaller bases and stops in the Ionian, Peloponnisos, Cyclades, Attika and Thesaloniki.”

Mr. Patellis continued by saying that the Ministries of Transportation and Merchant Marine worked closely with the company over the past three years “to establish the required regulatory and operational framework that allowed us to establish the seaplane as a means of mass transport in Greece.”

By the fall of 2006, the company plans to have operational bases in Kefalinia, Zakynthos, Lefkas, and Ithaki, and will begin development of a major base in Athens.”

Steven Earle, president of AirSea Lines International (Canada) Ltd. noted that “the geography of Greece is ideal for the rapid growth of seaplane service. More specifically, improved access and convenience will have considerable social and economic benefits for the more isolated regions and the mainland alike.”

Mr. Earle closed by saying that AirSea Lines plans to expand its operations to other European markets with priority given to the United Kingdom, Italy, France and Spain.