The Panorama fair’s organizer, the Kalofolias group, released results of its annual survey on domestic tourism at the fair’s inauguration ceremony. According to the survey, holidays and travel remain significant priorities for Greeks. The majority (52.7 percent) spend more than 900 euros per year on holidays, 44.2 percent spend up to that amount and slightly more than one in six Greeks (17.7 percent) spend 1,500 euros or more on their holidays.

This sixth survey on the holiday habits of Greeks also found that one in two people (51.2 percent) plan to have virtually the same vacation this year as last year (up from 49.4 percent in 2005), while 31 percent will trim down their vacation time and/or the amount of money spent (from 33.9 percent in last year’s survey).

As well, last year seven out of eight Greeks (87 percent) made at least one recreational trip within the country (58.7 percent) or abroad (6.8 percent) or both (21.5 percent).

This trend has shown an increase in the past few years. Also on the general rise is the figure of Greeks traveling abroad in general, which now reaches 45.3 percent.

The average duration of summer vacation is two weeks (24 percent), but 16.3 percent of those surveyed said that they holiday for no more than 10 days. In total, 71.3 percent have vacations that last up to a month, with 27.5 percent holidaying for more than 30 days.

August remains the most popular month for holidays, preferred by 60 percent of respondents, followed by July with 25 percent.

Their own holiday homes are the chosen accommodation for 33 percent of Greeks, with hotels being the second choice (27 percent).

When questioned on the three main priorities for the development of tourism in Greece, the most popular answers included an upgrade in the quality of tourism services offered, the cleanliness of destinations and the improvement of behavior toward tourists.

A surprising 44.7 percent said they believed that foreign tourists are better taken care of than domestic travelers.

Also somewhat surprising – as statistics show that Greeks are not among the Europeans that have embraced the World Wide Web – is that the Internet has emerged as the second most popular source of information when it comes to choosing accommodation, after recommendations by relatives and friends. The main criteria in choosing accommodations, again, according to the survey, include cleanliness, location and price.

The survey took place in early May and included some 800 housewives in the general Athens-Attica area. 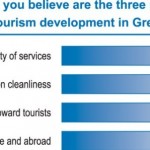 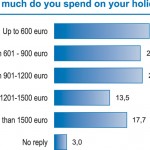 Another Increase in Air Traffic