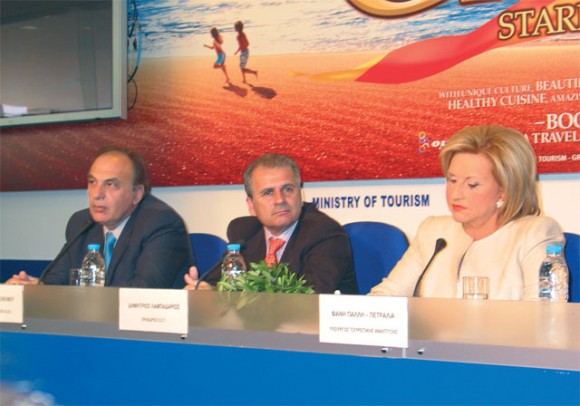 Government intends to introduce new legislation shortly that aims to cut huge chunks out of the country’s thick bureaucratic approvals process, said Tourism Minister Fani Palli-Petralia last month during her first press call since her appointment in February. She said the new legislation would help bring investment to the country’s tourism sector.

The minister said the new law awaits final approval from the ministry of finance and would be introduced in parliament shortly. The long-awaited tourism legislation formulated by her predecessor, under the title spa tourism, is in the process of being signed by the appropriate ministers, she said, and the legislation on agro tourism is being looked over by the economy minister.

Concerning previous legislation, she said the ministry would accept subsidy applications for the construction of five-star hotels throughout Greece, except in Athens and Thessaloniki, under the investment incentives law introduced last year.

In a similar vein, she said that in conjunction with the industry’s representative bodies, her ministry was studying ways of tapping the European Union subsidized Fourth Community Support Framework (CSFIV) investment program. Immediate plans include the setting up of a reception bureau for investment plans at the ministry.

And besides upgrading the National Tourism Council with new members from the political parties -and perhaps at some point becoming a true consulting organ for government tourism policy- the minister said a central call center in all basic languages would be set up to provide visitors with all tourism-related information.

In the meantime, the minister said that government is trying to promote other forms of tourism, such as cruises, agro tourism, conference tourism, visits to spas, visits and pilgrimages to religious sites, yachting and golf.

All of the above, according to the minister, is part and parcel of her basic tourism policy and strategy, which hinges on three guiding principles:  the initiation of a long-term tourism policy; the promotion of our tourism product; and the strengthening of our tourism product offer (destination upgrades, new destinations and new products) along with the improvement of tourism services.

She added that tourism is a major source of foreign exchange and tax revenues for the country, and presently accounts for roughly 15 percent of the gross domestic product and more than a sixth of total employment.

World tourism arrivals, she said, will double to 1.5 billion by the year 2020 and there is no reason why Greece cannot take a good percentage of that increase, much of which the minister expects to come from Asia, and in particular China. “This is our long-term aim, the pinnacle in wagers for Greek tourism.”