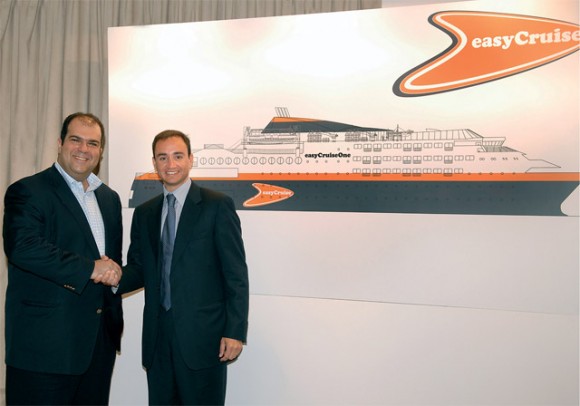 EasyGroup, the holding company of Greek entrepreneur Stelios Haji-Ioannou, signed a letter of intent with the Greek shipyard, Neorion Holdings, for the construction of as many as four cruise ships for use by its low-cost cruise business easyCruise. The new 500-passenger cruise ships will help easyCruise introduce its successful business to the Greek islands.

Stelios Haji-Ioannou, founder and chairman of easyGroup and president of easyCruise, was happy that Greece was selected following an international tender that drew bids from shipyards in Italy, Spain and Germany. “The competition was intense,” continued Mr. Haji-Ioannou, “and the criteria for our choice was both financial and technical.”

“We are committed to work really hard within the next few weeks, to ensure that this agreement is finalized and this significant investment remains in Greece,” said Ioannis Tavoularis, managing director of Neorion Holdings. Mr. Haji-Ioannou and Mr. Tavoularis briefed Economy Minister Giorgos Alogoskoufis before the agreement was announced.

“It is an important business agreement which could boost tourism and the shipbuilding sector and have positive effects on the Greek economy,” said Minister Alogoskoufis.

EasyCruise is aimed at younger passengers, offering low-cost holidays off the Mediterranean coast of France and Italy and in the Caribbean. The company hopes to begin operating in the Greek islands. The plan envisages weekend trips to Mykonos and Syros, starting from a marina in Faliron Bay, and four-day cruises to Santorini with possible stops at Paros, Naxos, Milos or Serifos.

Sources said Mr. Haji-Ioannou has asked the Minister for a long-term contract for the use of the Faliron marina.
Neorion Holdings S.A., established in 2004, owns 100 percent of Shipbuilding and Industrial Enterprises of Syros and 70 percent of Elefsis Shipbuilding and Industrial Enterprises S.A. Ship construction and repair has a long history on Syros Island, in 1861 the island had the first organized industrial shipyard in Greece.

Another Record Year for Blue Flags