Minister of Tourism Development, Fani Palli-Petralia, during her opening speech at last month’s conference on congress tourism said that the private sector was accountable for the delay in creating a Metropolitan Congress Center. She explained that over a ten-month period, while she was responsible for the Olympic facilities, she awaited submission of a proposal for the use of the Tae Kwon Do facility as a convention center from congress organizers and other tourism enterprises, but received none.

Ms Palli-Petralia said she would give the private sector a “second chance” to submit a proposal in the hopes that within 16 months Athens might have a Metropolitan Congress Center.

She said tourism authorities in cooperation with construction firms and banks will need to create a joint venture to undertake the cost of converting the facility, likely between 20 to 30 million euros, and which would be recouped from operating profits.

Ms Palli-Petralia concluded that without such a proposal, the government would either create its own joint venture with the private sector or simply use state funds for the convention center, something which would take much longer to complete. Also during the Hellenic Association for Professional Congress Organizers‘ (HAPCO) second Pan-Hellenic conference titled, Congress Tourism Today: Challenges and Prospects, Ms. Palli-Petralia announced plans to develop a National Convention Bureau and to promote congress and exhibition tourism in the larger Greek cities as part of the tourism development plan. 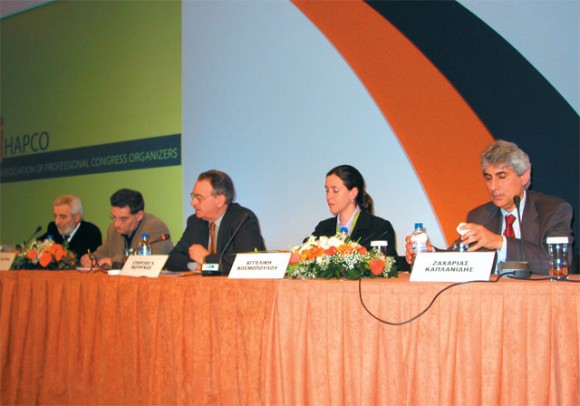 However, he pointed out that certain matters needed further discussion particularly supplementary commercial uses for the center since no convention center is profitable on its own. He proposed that a partnership comprised of the state, tourism sector, construction companies and banks be created for the convention center, and a foreign company be selected to manage it.

HAPCO’s two-day conference focused on conference tourism as an ideal solution for reducing the seasonality of tourism in Greece and as an avenue for tourism development in the post-Olympic era.

Presentations and discussions on the first day were centered on development and prospects in the Greek and international market, the Greek strategy regarding the regulatory framework, infrastructure and growth, as well as training in conference and business tourism.

The second day focused on public and private partnerships, synergies and activities in the private sector, and promotion and marketing.

Anthony Rodalakis, research manager for hospitality and leisure at PriceWaterhouseCoopers, discussed international trends in congress tourism. He pointed out that future trends indicate a lower growth rate in tourism arrivals for Europe and North America, with the exception of central and eastern European countries. He explained that Greece would benefit by diversifying its tourism product since the general perception is that the country is a “mature” tourism destination with “aging products.” The meeting and convention industry is profitable though increasingly competitive. For example, it currently contributes 100 billion dollars to the U.S. economy.

In their presentations, both Yiannis Patellis of Patellis Consultants Ergomichaniki Ltd., and Yiannis Mihalidis of Hospitality and Tourism, discussed the gradual though positive improvements in congress tourism in Greece. Mr Mihalidis presented the findings of an international electronic survey of businesses in the industry conducted over the last three months. A key survey conclusion was that although Greece drew great interest as a destination, the lack of organized information readily available and lack of promotion discouraged business. 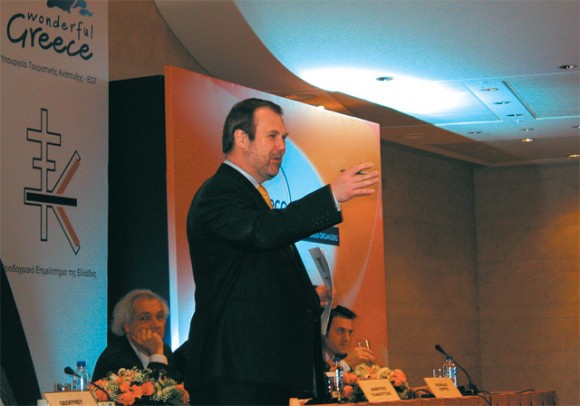 Geoffrey Fenlon, consultant and member of the senior management team of Edinburgh International Conference Centre, Scotland, delivering his presentation, The Fourth Way – Does it work?

The EICC is government-owned and financed, while a “special purpose vehicle” manages its commercial operations. This vehicle is a management team consisting of members from both the private and public sector, and kept strictly separate from country politics through established operating agreements. All EICC employees are hired from the private sector and possess the appropriate business background and skills.

Professors Gerasimos Zaharatos of the University of Patras and Dimitris Koutoulas of the Hellenic Open University presented the results of their 2005 Greek Hotel Branding Report, the first such study conducted. Their research indicated that 3.4% or 296 Greek hotels operate under a brand name. By relating this figure to the potential rooms available in Greece, it was determined that 16.8% of the hotels use brand name as a business strategy. By comparison, that percentage reaches an average of 30-35% in other European countries.

The panel discussion at the end of the conference reiterated the key issues emerging from the presentations such as the need for graduate-level education in tourism and management, employee training, providing high quality services and the need for improved infrastructure throughout Greece. Professor Sterios Mourgos of Trinity International Hospitality Studies said “we can only sell the products we have on the shelf, and we don’t have a Metropolitan Conference Center yet.”

Professor of tourism development at the Aegean University, Paris Tsartas stressed the need for more educational seminars. In reply, Zacharias Kaplanidis, vice-president of HAPCO’s board of directors, said that the association would be very happy to provide experienced professionals to speak free of charge at educational programs and seminars. His closing comment was that each tourism sector must cooperate and work with the government.