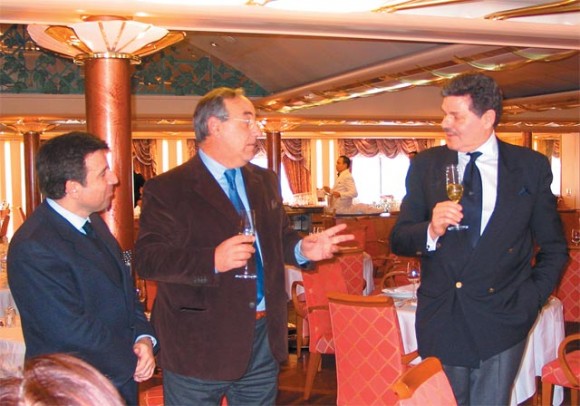 Andreas Stylianopoulos of Navigator Travel with unidentified collaborator, and Aris Zarpanely, executive vice president of Silversea Cruises as they toast to cruise vessels under construction.

Navigator Travel is now representing Silversea Cruises in Greece. Silversea, a luxury cruise company, has a fleet of four six-star ships (with two more under construction) that travel to ports throughout the world. The company’s high quality cruises, explains Aris Zarpaneli of Silversea, are geared for customers seeking unique yet discreet luxury achieved through a high staff to customer ratio, excellent service, facilities and programs, gourmet food and wine. The company’s success in this niche market is evidenced by the 60 percent repeat customer rate it enjoys.

Sixty percent of Silversea customers come from the U.S. and 40 percent from Europe. Mr Zarpaneli’s goal is to make this 50 – 50. European passengers are primarily from the UK, followed by Germany and France, and then Italy. Greek customers make up a smaller percentage, a number Mr Zarpaneli also would like to increase.

According to Andreas Stylianopoulos of Navigator Travel, a company promoting luxury cruises since the 60s and the Greek representative for Royal Caribbean International, Celebrity and Oceania Cruises, this is already on the rise. He finds that “the demand for cruises is continuously increasing in Greece. In 2004, about 14,000 Greeks took cruises to some part of the world.” Last year, “a total of 11.2 million people worldwide traveled on cruise ships” he adds.

Silversea’s Mediterranean cruise program includes 17 destinations in Greece, including northern Greece, the Eptanissa, Cyclades and Dodekanissa islands. As Mr Stylianopoulos points out, “the Mediterranean absorbs 12.6% of the world share as a cruise destination. Greece has the right product and it is a dynamic destination whose growth could be equivalent to a destination like the Caribbean, which absorbs about 45% of the world market. However, for this to occur significant investments must be made to improve the harbors and receiving facilities throughout Greece.”

Mr Zarpaneli adds that he wants “Greece to become a destination rather than a stopping point.” He envisions cultural programs and lecture series aboard ship for passengers provided in cooperation with Greek museums and organizations.

Silversea also has cruise programs to northern Europe, Africa, the Indian Ocean, Alaska, the west coast of the US, Caribbean and Panama Canal, North America, Canada, Australia and South Pacific, and Far East. The company will offer cruises to Russia, Poland and India in the near future.