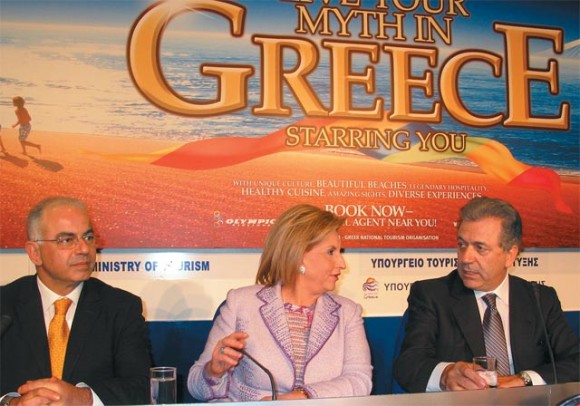 In a surprise move last month, during a reshuffle of ministers the government replaced its tourism minister, Dimitris Avramopoulos, with former deputy culture minister, Fani Palli-Petralia. The change of guard, however, went smoothly with the former tourism minister alongside Ms Petralia during a number of planned tourism events.

The two were on hand for the actual change of office along with the former deputy minister of tourism, Anastasios Liaskos, whose post as deputy minister has been eliminated.

Ms Petralia said she would continue in the steps created by the outgoing minister and added that she fervently hoped the private sector would continue its support of the ministry in its efforts to develop tourism and increase the quality of services offered.

“Our aim is strengthen the development of our tourism product, to lengthen our tourism season, and to entice foreign tourism investment,” said the new minister. “Our future is in alternative forms of tourism with an emphasis on the areas of conference, religious and athletic tourism, all of which will enrich our tourism product.”

The new tourism minister added that her previous posts within the sports and culture sectors should act as a plus for her in the tourism ministry, and that she feels somewhat at home here as her grandfather was the country’s first tourism secretary some 100 years ago.

“I believe that all of us together can make Greece the most hospitable and thus the most tourist-friendly.”

Fani Palli-Petralia was born in Athens in 1943. She married local businessman Nikos Pallis (stationary and printing) and then continued her studies at the Athens Law School while a mother of three. On graduation, she practiced law in Athens and became involved in politics and women’s rights. She was elected to Parliament for the first time in the Athens second election district in 1985 and later became a member of New Democracy’s central committee.

During her political career she headed the candidacy committee for the 1996 Olympics, which were ultimately awarded to Atlanta by the International Olympic Committee. In 1991 she presided over the organizing committee for the Athens 1991 Mediterranean Games. On her curriculum vitae it says she speaks French and English fluently.

Along with her political career, Ms Palli-Petralia has published two books and a series of articles on the modern woman, culture and the Olympics.  She has raised four children, three daughters and a son.

New EOT Board of Directors Meet