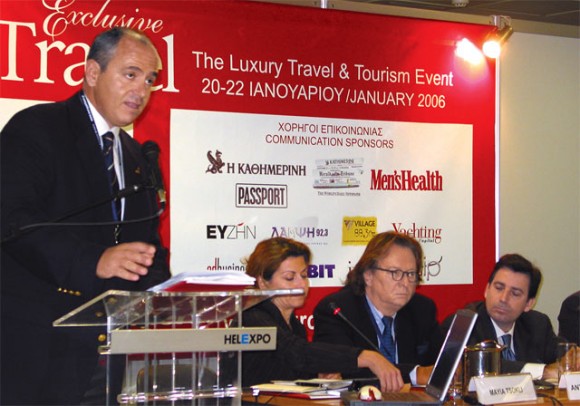 Christos Nikolaidis, chairman of the organizing committee for Exclusive Travel, introduces one of the panels during the fair’s conference on extending Greece’s tourism season.

New thoughts and expectations on the future of luxury travel to Greece were expressed at last month’s Exclusive Travel fair held at the Helexpo Palace exhibition center in Athens. The fair, considered a niche event in Greece, is dedicated to luxury travel and directed at those who seek luxurious tourism products and services. This year, the organizers, EuroPartners, hosted (with the support of the Hellenic Tourism Organization) 114 foreign buyers to the fair and arranged for 10 to 20 minute appointments at exhibitor stands.

Participants at Exclusive Travel 2006 said they were pleased with the business carried out as well as the general organization of the fair, which was considered up to par with the sector it represented.

Geoffrey Lipman, special advisor of the general secretary of the EU World Tourism Organization, got the conference off by saying that “the luxury sector is showing itself to be the most resilient part of tourism demand and the fastest growing segment of the market as destinations seek to push up yield and drive down impacts…” 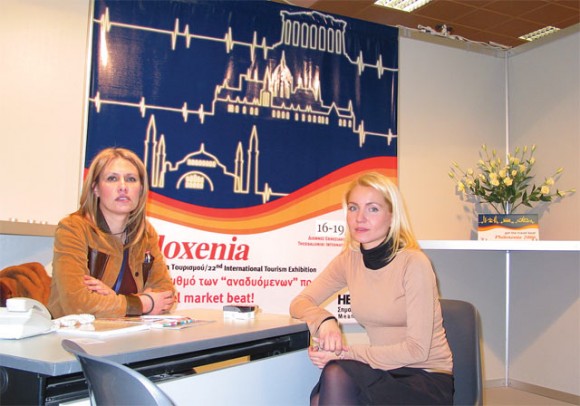 Chrysa Krassa, head of organization for Helexpo’s Philoxenia travel fair, with her assistant, Nelli Agelopoulou. Philoxenia, to be held November 16 to 19 this year at Helexpo in Thessaloniki, now considers itself a meeting point for new emerging markets of southeast Europe and the eastern Mediterranean.

Mr. Lipman was followed by Dick Stroud of the British marketing firm 20plus30. He reminded that Greece’s top tourist countries (Germany, the UK, France, Italy, Scandinavia) have a huge working population that is over 50, and some 22 million that are over 60 years old, and that most are wealthier than any other generation, and travel extensively.

Mr. Stroud added that for the 50-plus traveler, Greece is in an ideal position to satisfy their demand for trips that are adventurous (nature and outdoor activities), educational (especially historical), and include unique cultural experiences (themed holidays, such as wine history and culture).

However, he said that we must rethink the meaning of luxury and realize that “new seniors” are very different. For example, he said, Europe’s affluent older population is fueling the demand for permanent and seasonal retirement residents.

The idea of resident homes was taken up later by Vassilis Mantzos (he established Olympic Holidays in London in 1966) of Faber Maunsell Hellas. He said that in the past decade some 10 million tourist residences have been sold around the world.

“I believe if we fully utilize the gigantic possibilities that Greece offers in creating tourist residences, this would greatly drive our tourism.” He said many younger seniors want to invest in a residence where there’s a good climate, friendly people and lots of tourism interests; and Greece provides more of the aforementioned than most other countries.

“Greece could become the California of Europe,” he said. However, he added, at the moment Greece is far behind in its development of tourism residents with demand far exceeding what’s on offer. 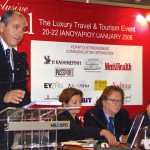 Christos Nikolaidis, chairman of the organizing committee for Exclusive Travel, introduces one of the panels during the fair's conference on extending Greece's tourism season. 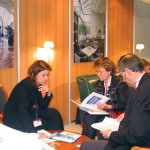 Madeleine Madianou, who was recently appointed the MICE director for the Chandris hotel group, with two foreign buyers interested in organizing meetings, incentives and seminars in Greece for their bigger telecommunication company clients. Madeleine and her team held more than 24 appointments with foreign buyers in a single day. 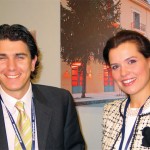 Marios Kounelis, managing director of Hotel Helmos, Kalavita, manned his Luxury Travel stand continuously, but with no time for lethargy as he had the good fortune to share the experience with his legal-eagle companion, Dimitra Kerlinioti, who assisted throughout the three-day fair. 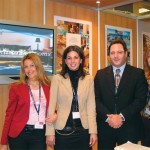 Spyros Maganiotis (second from right), director of sales for the Divani Chain of hotels, with his team of experts; Eleni Spanacou (from left), Mara Kapiti, and Despina Economou. The team gave foreign visitors a full rundown on the group's extensive conference facilities. 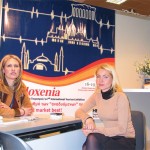 Chrysa Krassa, head of organization for Helexpo's Philoxenia travel fair, with her assistant, Nelli Agelopoulou. Philoxenia, to be held November 16 to 19 this year at Helexpo in Thessaloniki, now considers itself a meeting point for new emerging markets of southeast Europe and the eastern Mediterranean. 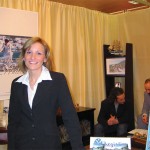 Eleni Kountouroupi, head of sales for the Aegialis Resort and Spa on Amorgos Island, told her foreign visitors that besides its up-market lodging services, the 5-traditional building complex specializes in organizing weddings to the point where every detail is taken care of. 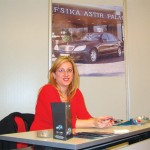 Vana Kacayias, a third-generation family executive of the limo service company Kacayias, which has been in the business since 1924. Now, with its fleet of luxury limos, mini vans and tour buses, the company provides 24-hour service, 365 days a year, and is the only company of it kind that does so. 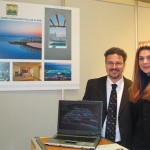 Manolis Trasanis, the new manager of the Saint John Hotel, Villas and Spa on Mykonos, with Marirena Troulinou, the hotel's public relations specialist. Visitors to the stand learned of the unit's more than 2,000 square meters of outdoor convention and function space next to the hotel's impressive pool area, which is ideal for gala dinners and events for up to 800.

EIBTM Proved Good for Most, Bad for Some