Athens to Wear a Barrage of Colors this Summer 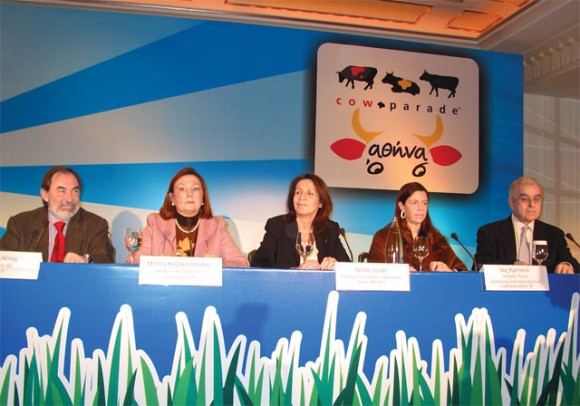 Athens is about to bloom and blossom in colors and art that promises to please the eye. This summer, Athenians and visitors to the capital will see more than 75 artistic and colorful cows “graze” around the city’s streets and parks. The spectacle may not rival the city’s staging of the 2004 Olympic Games, but it will be something entirely different for everyone to enjoy.

CowParade Athens, beginning in May and lasting up until the end of August, is part of a worldwide artistic event created in 1998 by Swiss artist Walter Knapp. The idea is to supply plain white life-size replicas of cows to the country’s artists, who will then use their creative talents to fashion a colorful cow art piece to spice up a city’s atmosphere.

Once the replicas are adorned they will be placed all around the city. So far, more than 33 cities around the world have held a similar event with the participation of more than 5,000 artists.

CowParade is not meant to be high art, however, said the organizers. It is first and foremost a public art exhibit that is accessible to everyone. As well, while the cow sculptures remain the same, each city’s artists are challenged by the art from past events, inspired by the cultural influences of their respective cities, and moved by their own interpretation of the cow as an art object.

At the end of each event, the artistic cows are auctioned off and the half the proceeds are turned over to a charitable organization, which, in the case of Athens, is the umbrella organization for 10 children’s charities, Together with Children.

Organizers added that all CowParade events depend on the partnerships that can be created between the city, the commercial sector and artistic communities.