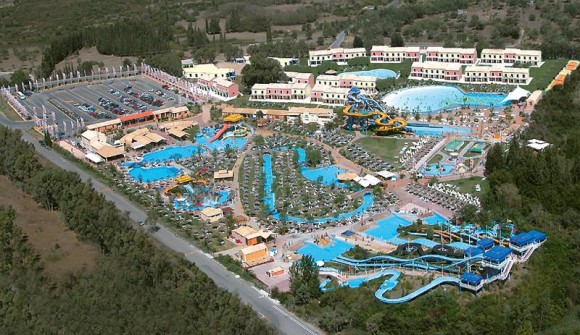 One of the most recent tourism projects completed is Aqualand Village on the island of Corfu.

The Hellenic Center for Investment announced last month that it is rapidly proceeding with the implementation of three large tourism projects worth 600 million euros in foreign funds – one on Crete, one in Volos and one on the island of Arkoudi in the Ionian Sea. The projects had been blocked by bureaucratic red tape for quite some time.

These are the first tangible results of our new strategy to push lingering investment plans and lift the counter-incentives that had troubled investors, said the center.

It also estimated that the realization of investments of great size and quality will considerably improve the business climate, as foreign investors will be convinced in practice that Greece is a favorable investment destination and follows a business-centered policy.

On Crete, the project refers to a high-quality development worth 250 million euros, which is in the completion stage and is expected to create more than 300 permanent and seasonal jobs.

In Volos, in the Iolkos area, 250 million euros is to be invested in a luxury hotel complex. It will include 150 five-star rooms, top-quality villas, a conference center, a golf course covering 1.2 square kilometers, a “thalassotherapy” and health center, a heliport and a marina for 150 boats. The entire project is expected to create 800 jobs.

On Arkoudi, an island between Cephalonia, Lefkada and Ithaca, the tourism project has an estimated construction cost of some 100 million euros and will cover an area of about 4 square kilometers. The development will include 140 five-star lodgings, a marina, a spa, an 18-hole golf course and sports facilities. The project is expected to create some 300 jobs.

The investment center said that at least another four similar projects are soon to be moved forward. In the meantime, the tourism ministry says it has been approached by a number of potential investors who say they are waiting for the new land usage framework.

Greek Golf Investment Back in the Limelight