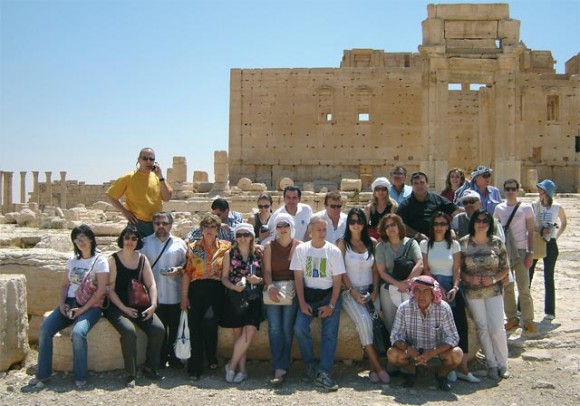 Greek travel agents during their recent visit to Syria.

Twenty-four outgoing travel specialists from Greece visited Syria recently to get a better idea of what that country has to offer to the Greek traveler, and to discuss ways in which the Syrian and Greek agents could work together to create common business agreements.

Stavros Bouzanis, vice president of the Hellenic Association of Travel and Tourism Agents, headed the mission and said he expected an increase in the business-to-business cooperation as both countries have strong historical and cultural ties.

During a workshop with Syrian travel agents, the Greek side said it found the country has a variety of tourism products that could entice many Greeks to visit. As well, both sides found ample common ground to sign some initial cooperation agreements.

Earlier this year, Syria and Greece had signed a cooperation agreement whereby the two countries would work toward creating packages that would entice tourists from third countries to visit both destinations.

The Greek side, however, stressed that much work had to be carried out in Syria to develop that country’s general infrastructure -direct flights and connections, road network, hotels, services- so as to attract visitors.

During a meeting with Syria’s tourism minister, they were told that the commercial tourism cooperation between the two countries was welcome and that structural works were underway. The minister also said that a promotional program was underway to entice Greek travelers to Syria.