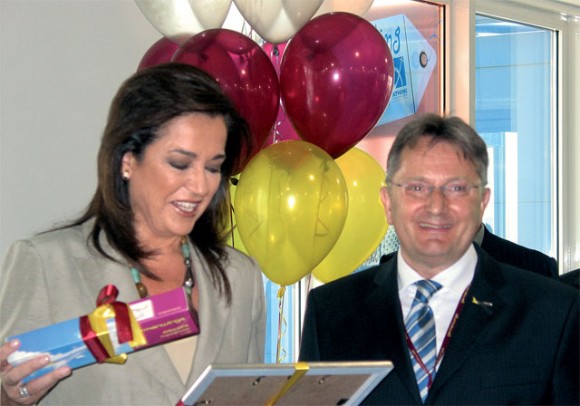 Athens Mayor Dora Bakoyannis and Dr. Andreas Bierwirth, Managing Director of Germanwings during the christening of the new Germanwings aircraft.

On the occasion of its second year of operation in Athens, Germanwings last month honoured the city by christening its new Airbus A320 “City of Athens.” Athens Mayor Dora Bakoyannis did the official christening.

As well, last month the no-frills airline ensured its further expansion with the order of 18 new passenger jets by Airbus, along with an option for 12 more. The order was signed by the management of the low-cost airline and representatives of Airbus during the June 16th Paris Air Show in Le Bourget. The first aircraft, type Airbus A 319 with 156 seats each, will be delivered in 2006.

Although Germanwings has set up an integrated program for business travellers and frequent flyers, the carrier caters to young people, families and private travellers. The importance of services to the corporate market, however, had not been lost to the airline.

“Companies and business travellers are a very important group and we want to work with them”, Dr. Andreas Bierwirth, Managing Director of Germanwings, explained. “Today, more than 40% of our passengers belong to this group.”

This development has not been coincidental. The young, dynamic airline says it already deals with 480 companies and is a leader in this field. An integrated booking system supports the cooperation. Extranet links between the company and Germanwings site, with access to the relevant section via password, allow bookings at special corporate rates the companies have agreed on.

Germanwings says that it regularly invites its top customers to participate in advisory boards in order to meet the demands of the frequent flyers.