Another Record Year for Blue Flags on Greek Beaches

Greece’s tourism industry received another welcome boost last month when the Hellenic Society for the Protection of Nature announced that 383 of the country’s beaches -five more than last year- received the coveted European Union’s “Blue Flag” for clean, well-organized beaches. To receive this ecological seal of approval, each beach had to fulfill tough 27 criteria, including those for water quality, environmental management and safety.

The tests were conducted under the Blue Flag Campaign, run by the independent Foundation for Environmental Education, which is responsible for inspecting thousands of beaches around the world. The Dodecanese islands boasted the most beaches with Blue Flags, with a total of 44, followed by Halkidiki with 34.

The awards were given to 383 Greek beaches in total – five more than last year. Five marinas were approved, two fewer than in 2004. 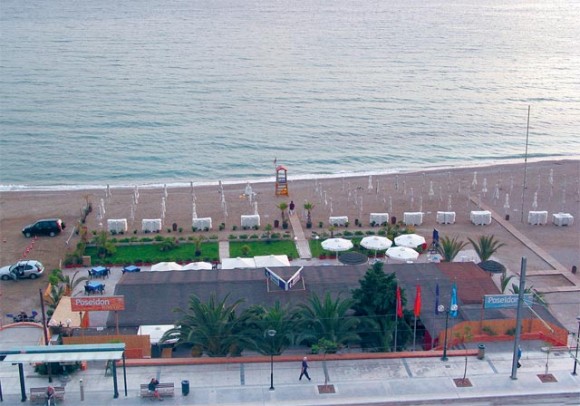 For the second year in row, the Poseidon Hotel in the Athens Faliro area worked diligently to ensure the beach property in front of its hotel was one of the best, and in turn was again awarded the prestigious Blue Flag.

The Hellenic Society for the Protection of Nature has handled the international “Blue Flags” program in Greece since 1992. The Blue Flag, a symbol of quality in over 35 countries today, is awarded with strict criteria to organized beaches and marinas operated by coastal municipalities, hotels and other operators. The program aims at cleanliness of sea and beach, safety and proper services for bathers and visitors, creation of environmental sensitivity and active protection of the coastal region.

The Blue Flag awards came just a week after the EU found that 99.9 percent of all coastal bathing areas in Greece met with its mandatory cleanliness requirements.

Greece had the cleanest coastal waters in the European Union in 2004, with only one of a thousand samples checked not being able to reach EU criteria, according to data released in Brussels recently.

The section on Greece found that 99.9 percent of all coastal bathing areas met the mandatory EU cleanliness requirements, and 97.6 percent complied with the more stringent ones. The dirtiest of the 1,965 spots checked was the Hellenic Tourism Organization beach on Zakynthos.

The EU annual bathing water quality report for last summer was based on figures provided by member states. It noted that some EU nations remove dirty swimming spots from their check lists, to avoid cleaning them up, or ban bathing in substandard areas without doing anything to improve conditions.

A commission report on 19,965 bathing areas in 25 EU states said 96.7% of coastal beaches were safe, but 10% of beaches in rivers and lakes were not. New member states’ beaches tended to be dirtier than in older states, it added.

But the commission pointed out that water quality tended to improve once regulations were enforced.

EU Environment Commissioner Stavros Dimas said although bathing water quality across the EU was generally good, there was scope for improvement.

“I am particularly concerned at the tendency of some member states to remove below standard sites from their official list of bathing waters and/or ban bathing at listed sites rather than bring them up to standard.”

The commission said these steps were often being used at sites with chronic pollution problems.

“Such an approach is not in line with the directive and the commission intends to discuss this matter with the member states concerned,” the report said.

Tourism Volunteers Back on City Streets