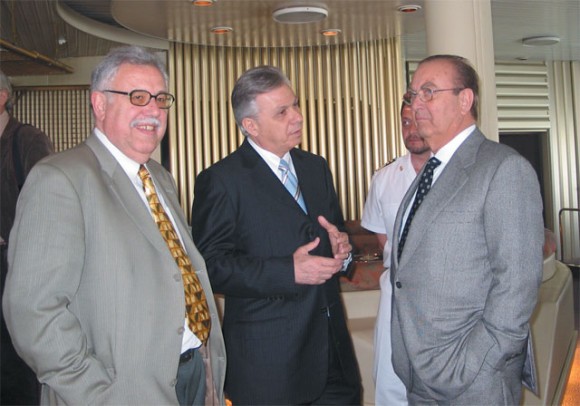 At least three Louis group cruise ships will raise the Greek flag, CEO Costakis Loizou said aboard Thomson Destiny, the group’s flagship, during a reception held while the vessel was docked in Piraeus last month.

Mr. Loizou praised the contribution by Merchant Marine Minister Manolis Kefaloyiannis and seamen’s associations for their efforts to revive the Greek cruise industry, although, he added, more remains to be done.

One of the special guests at the event, Pericles Panagopoulos, president of the Coastal Shipping Companies Association, said more is needed to bolster the sector, which with coastal shipping operators accounts for 14,000 of the 18,000 currently employed Greek seamen.

Louis group this year celebrates 70 years of operation in the tourism sector and recently created its Louis Hellenic Cruises subsidiary. Thompson Destiny is a 35,000-ton, 214-meter-long vessel, and can carry up to 1,636 passengers in 722 cabins. It has two swimming pools, spa, casino, library, gym and a variety of entertainment facilities.

After the event concluded, it sailed off on its scheduled eight-day cruise to “Cosmopolitan Western Mediterranean,” including Capri, Nice, Monte Carlo, Barcelona and Mallorca.

Another Record Year for Blue Flags on Greek Beaches