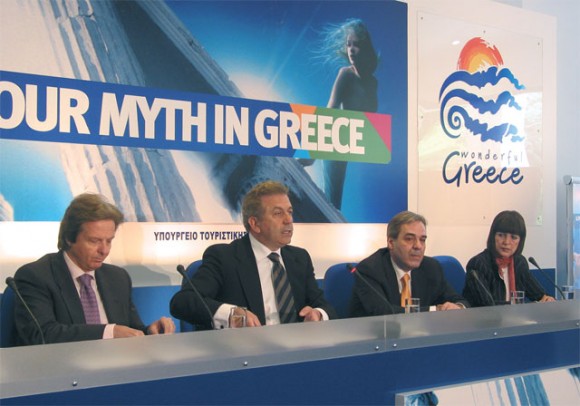 Tourism Development Minister Dimitris Avramopoulos last month, during a press call, said that we would see at least a seven percent rise in tourism arrivals this year. He said that according to data received from Hellenic Tourism Organization offices abroad the increase would be led by the U.S. with an impressive 40 percent increase over 2004.

Local tourism entrepreneurs that specialize in travel from North America say that the increase in arrivals from the U.S. will hit more than 65%. They say their offices see as much as a 100% rise in bookings, when compared with last year, which was a good year for North American arrivals due to the Athens 2004 Olympic Games.

This high increase is followed by that of Spain with a 25-28% increase, Australia with a 25% increase; Canada with 18 percent and an average 12% increase from France, Russia and Holland. He added that this year charter flights would increase by some 40% and the number of cruises would more than double.

He said Greece’s major traditional markets, such Germany, the UK and Italy, would show less than impressive increases -8%, 1% and 6% respectively- but nonetheless would be substantial due to the high numbers of arrivals hosted from these countries annually. (Holidaymakers from Germany and the UK make up around half of all total annual visitors to Greece.)

Mr. Avramopoulos, quite optimistic for the Greek tourism sector, said it has stabilized and that the next few years will see a rebound, and growth, as a result of the ministry’s advertising and promotion policy. He said that so far this year some 26 million euros have been spent on promotion and that even more will be spent next year, and that the campaign will get off the ground even earlier than the previous one.

As a part of the promotion program, he said, Greece has been fortunate in being selected as the honored country at major 2006 tourism exhibitions in Moscow, Beijing and Berlin.

The minister further announced the establishment of a tourism volunteer pilot program with a group who will offer their services at museums and archaeological sites. He said that already the applications received have been more than expected. This comes in the aftermath of the successful contribution of volunteers at last summer’s Olympics. Formal announcements, he said, will be made shortly.

Concerning foreign investment, after being asked how many foreign tourism investment projects are currently under way now in Greece, Mr. Avramopoulos said there are three or four investments now being implemented, worth around 200 million euros each.

The minister also said that government is promoting the lifting of its saturation status concerning the maximum number of hotels permitted in certain regions, as well as the replacement of old hotels with new ones.

As well, Mr. Avramopoulos said that his ministry would cooperate with the country’s cultural ministry to create a Greek Film Commission, which would be responsible for enticing and approving major film productions in Greece. He said major presentations would be made to film companies in the U.S.

Still No Decision On Conference Center