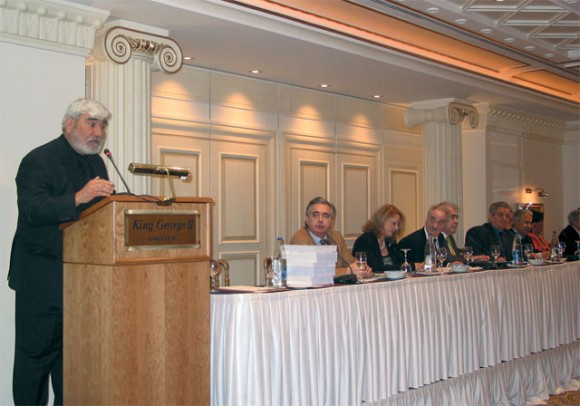 Kostas Badouvas, a member of parliament and a long-time tourism specialist, was awarded honorary membership in the Hellenic Association of Travel & Tourism Agents.

Members of the Hellenic Association of Travel & Tourism Agents were told during their general assembly last month that the policy leaders within the tourism development ministry would soon change the legislative framework on travel office operations, and would examine the possibility of including agencies within the government’s new development law. Guest speaker at the general assembly, Deputy Tourism Development Minister Anastassios Liaskos, also stressed that the ministry strongly supports travel agencies that specialize in theme tourism, and that his ministry is looking at ways in which to include agencies within the government’s social tourism program.

Yiannis Evangelou, once again voted in as the association’s president, reviewed the problems that face the membership and urged government to take the proper steps to solve them. He asked that the travel agent and tour bus owners sector be included within the government’s new development law for subsidies; that the coastal shipping sector become fully liberalized; and that the change in the legislative framework on travel office operations be implemented as quickly as possible.

Hoteliers Urge Adoption of Longer Hours for Museums and Shops

Another Year for Tourism Business Subsidies