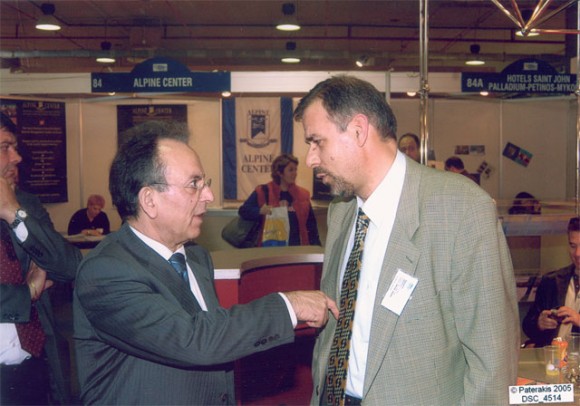 A number of government ministers paid a visit to this year’s Panorama, including the tourism minister, the labor minister and the development minister. The latter, Dimitris Sioufas, spent quite some time discussing tourism and the flow of information to professionals with GTP’s sales and advertising manager, Thanassis Cavdas.

The record number visitors to the Greek capital’s annual domestic tourism fair, Tourism Panorama, which was opened this year by Deputy Minister for Tourism Development Anastassios Liaskos, saw sleek presentations by a good number of the country’s regional prefectures.

And to set their minds to rest as to why they appear to be paying more for a vacation than foreign guests do, Mr. Liaskos, during the opening ceremony, explained that “Greek tourists pay for their delay in deciding where and when they will spend their holidays.”

But while he didn’t mention the previous years’ surge in last minute bookings from abroad, because of cheaper prices, he did say that Greek hoteliers do not distinguish domestic tourists from foreigners.

On a more general front, he said that one of the main pillars of the ministry’s policy is the development and promotion of local tourism products: “Domestic tourism has particular importance for Greece, as it can contribute to distributing tourism along seasonal and geographic lines, in regional development and in job creation,” he said.

Mr. Liaskos added that besides the “We Stay in Greece” promotional campaign, the ministry is more than doubling its fund allocation for the Hellenic Tourism Organization’s subsidized social tourism program, from 2.5 million euros in 2004 to 6 million euros in 2005. The program provides families, youth and seniors from the more financially challenged classes with offers for holidays in Greece. In cooperation with hoteliers, tourism programs will be available not just to Greek but also to all EU citizens, regardless of their taxable income. Discounts will range from between 30 and 50 percent for groups of four or more people. Another 10 percent will be deducted for bookings by April 30. 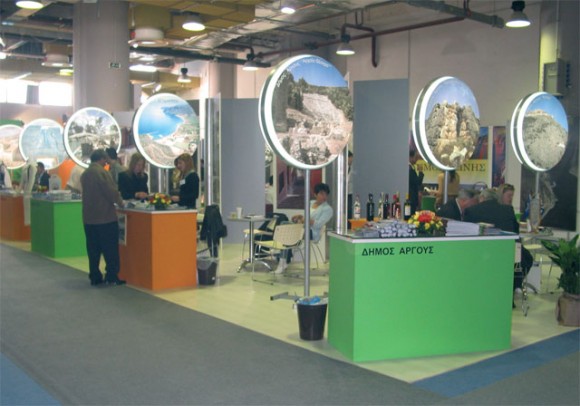 All of Greece’s prefectures were on hand as usual at this year’s fair, and most were well organized. For the most part, the prefectures upgraded and modernized their presentations and manned them with knowledgeable personnel. Thessalia in particular, the honored destination at Panorama 2005, showed all how well a prefecture could organize to promote tourism to the area.

In the meantime, Greeks’ appetite for tourism remains unabated, as the annual Kappa Research tourism survey, presented at the exhibition, shows. The steady rise in traveling abroad continues, with 25.8 percent of Greeks saying they do so once a year and 6.1 percent, twice.

However, those taking recreational trips with overnight stays declined from 70 percent in 2002 to 57 percent. The average expenditure on holidays was 1,300 euros, an average of about 105 euros per day.

The 10th Tourism Panorama exhibition, with Thessaly as the honored domestic destination, was organized by the Express-Kalofolias group.

Although the fair, held at the Pireaus Port Authority’s exhibition center, was the same size as last year – 13,500 square meters – there were 625 exhibitors (23 more than last year). 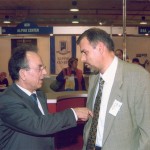 A number of government ministers paid a visit to this year's Panorama, including the tourism minister, the labor minister and the development minister. The latter, Dimitris Sioufas, spent quite some time discussing tourism and the flow of information to professionals with GTP's sales and advertising manager, Thanassis Cavdas. 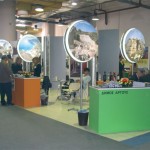 All of Greece's prefectures were on hand as usual at this year's fair, and most were well organized. For the most part, the prefectures upgraded and modernized their presentations and manned them with knowledgeable personnel. Thessalia in particular, the honored destination at Panorama 2005, showed all how well a prefecture could organize to promote tourism to the area. 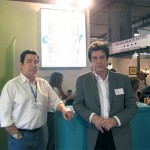 Anastassios and Evangelos Stavropoulos of Hydra Travel were on hand to greet customers during the long hours of the fair. This year, they concentrated more on the trade professionals visiting the fair, but said that although there was a good stream of consumers the number of professionals that took time to visit was disappointing. 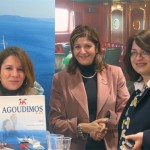 Mary Stylianelli (left), reservations and sales director for Agoudimos Lines promoted both the ferry line's domestic and international routes - Rafina to Andros-Tinos-Mykonos, and Greece to Italy to Albania - and the company's new Internet site, which includes on-line booking possibilities. 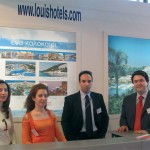 The Louis Group participation at this year's fair included its newest company, Louis Hellenic Cruises. On hand to promote the group's hotels were Thenia Georgopoulou, Maria Roumeliotis and Thanassis Bakalis. On the right is George Paliouras, the local sales manager for the new cruise line. 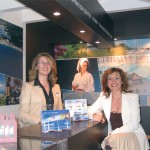 Irene Samara, leisure sales manager for the Porto Carras Grand Resort, and Ioanna Tzerachoglou, the resort's congress and incentive sales manager, at a new and up-market stand created by owner Technical Olympic Group of Companies. They said that next year the stand will be even bigger and better, as will the general presentation, as Chalkidiki will be the honored Panorama destination. 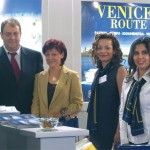 Petros Vassilopoulos, sales manager for Anek Lines, said that ferry companies are now out of the doldrums. For Anek, last year's sales were up by some 8.5% and net profit was up 11.9%. He added that he expected even better results for this year. The company just moved into a brand new 3-floor company-owned office building on Crete. 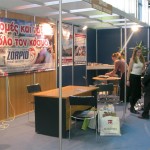 Although a simply decorated stand, the Zorpidis Tourism Organization, with offices in Thessaloniki and Athens, managed to garner a prominent position at this year's fair. Staff handed out thousands of brochures on holiday packages for home and abroad to a steady stream of fair visitors. The company celebrates its 30th anniversary this year. 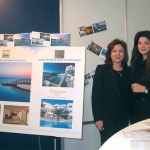 Popi Pirounaki of "Travel for all" with her sibling, Marirena Troullinou, who recently took over as the sales and marketing representative for the deluxe Kempinski Resort Saint John Hotel on the island of Mykonos. She said that if the bookings at the Saint John are any indication, we are in for a very good tourism year. 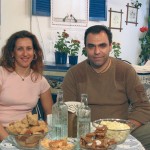 Vanessa and Kostas Rodopoulos from the island of Ios. Mr. Rodopoulos, responsible for tourism promotion to the island, was one of the many domestic destination exhibitors that participated in this year's special "Greek Tastes Panorama" with some unique foods of the island. 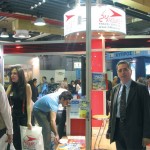 Antonis Seretis (right) again this year made sure his company, 24 Hours Tourism Travel, pulled in record crowds to its Panorama stand. Besides a strong promotional program on the stand, Mr. Seretis provided continual shuttle services to the fair - every 15 minutes - from the Piraeus train station with distinctively decorated 24 Hours mini buses. 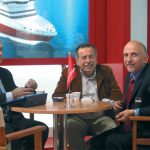 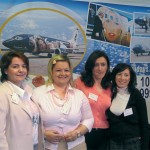 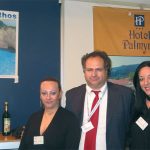 A number of hotels from Zakynthos Island decided to work together at this year's Panorama to promote their lodging units, and the island, on their own special stand. From left are Gina Margari, general manager of the Diana group of hotels; Nikos Dimopoulos, manager of Sunrise Hotel; and Katerina Margari, the brand development executive for the Diana hotel group.