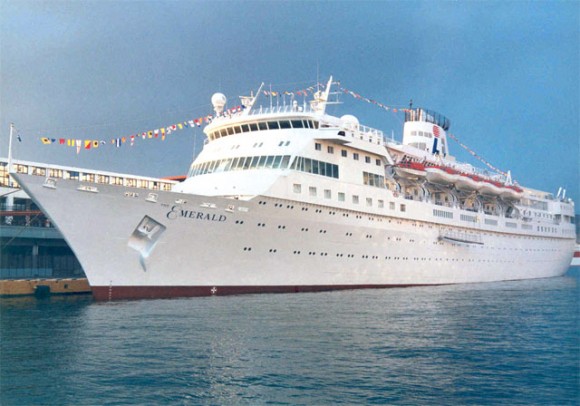 Louis Hellenic Cruises held an inauguration reception in Piraeus aboard its cruise ship The Emerald.

Last month, Louis Hellenic Cruises held an inauguration reception in Piraeus aboard its cruise ship The Emerald. The new cruise company announced the beginning of its cruise program for this year. Company executives say bookings have topped every expectation and that if the trend continues the cruise line will have to place even more new ships on the routes.

The new cruise line hopes to fill in the hole left in the Greek cruise sector with the demise of Royal Olympic Cruises, in which the Louis Group and the Potamianos family were the major stockholders. Although initial plans earlier had called for just two cruise vessels for the Piraeus-based line, the barrage of bookings forced the company to add a third and a fourth cruise vessel for the Greek market.

Kostakis Loizos, the president of Cypriot-based Louis Group, which owns the new cruise line, said during the reception that his new company would do all in its power to bring Greek cruising back to the height it deserves.

The line’s managing director, Giorgos Stathopoulos, said the company’s basic strategy is not to open support and sales offices abroad but rather to allow a free field for Greek travel organizers to cooperate fully with Louis Hellenic Cruises.

Four cruise vessels – the Calypso, Ithaki, Perla and Emerald – will execute three-day, four-day and seven-day cruises out of Piraeus.

Separately, the owner of the new cruise company “easycruise” told reporters that the company begins its cruise season this May from the French and Italian Riviera.  He said that if these inexpensive cruises are successful, he would consider bringing vessels to Greece. He added that the criteria would also be a competitive Greek airport.