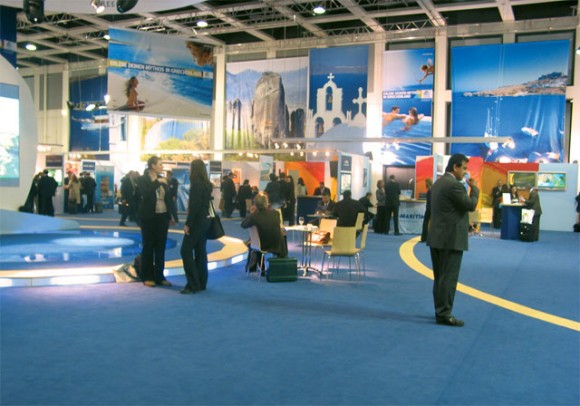 For the first time in memory, Greece held its head high at a world travel exhibition and showed the world its capabilities. The Greek pavilion, with its avid colors, wide-open spaces, and design continuity, outshone its Mediterranean competitors, not only with its design but also with the record number of visitors.

Greek exhibitors, such as Takis Kaloutsakis, president of the Heraklion Hoteliers Association, said the presentation of Greece, and Crete, was the best seen since 1976. “Our overall presentation surpassed all previous attempts,” he said.

And Greek government representatives were just as pleased. The year 2005 will be one of stabilization and a rebound for Greek tourism, but there will be considerable improvement in 2006 and 2007 when the results of the current policy and promotion campaign become tangible, Tourism Development Minister Dimitris Avramopoulos said last month during Berlin’s ITB tourism fair.

For 2005, the picture in the German market appears positive as, according to the Touristik Report magazine, the Rewe Touristik tour operator has shown a 38 percent yearly rise in bookings for Greece. Also rising are bookings with TUI, Alltours and Attika Reisen, unlike Neckermann’s.

“The worst of the recession is over for the international tourism sector: Continuous improvement is now expected.” These were the positive conclusions drawn by Dr. Christian Goke, Chief Executive Officer of Messe Berlin, speaking at the International Tourism Exchange ITB Berlin 2005. “The figures speak for themselves: The total of 10,409 exhibitors is not only a new record but we are also pleased to report that, despite unfavourable weather at the start of the event this year, the attendance of 142,351 is even better than last year’s substantial total of 141,139.” 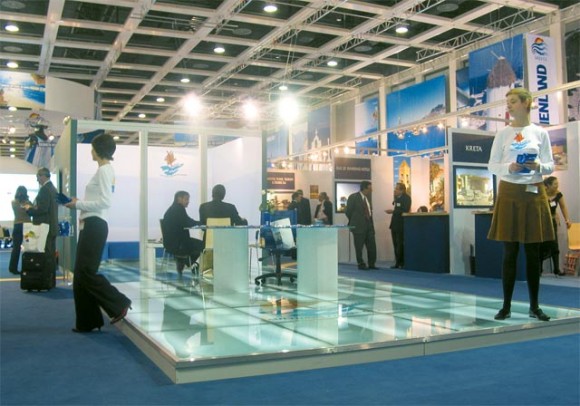 Patras created a strong presentation at this year’s fair with an impressive stand to promote the city as Europe’s cultural capital next year. Representatives on the stand said they were pleased with the turnout, but it would have been nice to have a program of events to present.

Furthermore the structure of the visitors reveals a significant improvement in quality. Goke: “Attendance by trade visitors rose by 12 per cent to 83,987 (2004: 75,019).” The world’s leading tourism trade fair is becoming increasingly international: among this year’s trade visitors more than one third, 33.5 per cent, came from abroad, a one per cent increase over the previous year.

In its summing up of the ITB the World Tourism Organization (WTO) made particular mention of the good mood within the industry. Francesco Frangialli, Secretary General of the WTO: “At this annual meeting of the international tourism sector, the world’s largest, the message emanating from the ITB Berlin is that the tsunami has failed to inhibit the growth of tourism to Asia, which continues to expand vigorously, and which has already proved, in past years, its remarkable ability to react to changes. The WTO expects that , with the positive development of the economy and of trade in 2005, worldwide tourism is set to continue its run of success.”

The ITB Convention Market Trends & Innovations, organized last year for the first time by Messe Berlin in association with the Fachhochschule (Technical College) Worms, saw attendance almost double this year from 3,500 to 6,000. With 56 separate events and 176 speakers it provided insights into current trends and innovative business models for tourism.

Its highlights included the first ITB Aviation Day, the “Future & Innovation Forum”, the Practical Workshop on China and the Experts’ Forum on India. Prof. Roland Conrady, academic director of the convention: “The total of more than 6,000 interested participants confirms that the ITB Convention has been able to develop its role as the leading think tank for the global tourism sector. The ITB Convention has evolved into an attractive platform for the exchange of information about topics of particular relevance to tourism.”

This year the ITB Berlin introduced two new sections of the market. For the first time the subject of business travel was covered under the heading of “Business Travel@ITB Berlin” and it met with immediate success.

Exhibitors at the ITB Business Travel Lounge announced that they were busy meeting visitors on all three days (Sunday to Tuesday) and an encouraging number of contracts were signed. There was a good response to the introduction of a program of seminars aimed specifically at travel managers, and almost 1,000 visitors took part.

There was also very keen interest in the new theme hall 1.1 “Trends & Events”, which was subdivided into sections on EcoTourism, Experience Adventure, Travel for the Disabled, Gay Travel and the Youth Travel Centre.

This year’s partner country, Germany, was responsible for arranging the opening ceremonies of the ITB Berlin 2005. 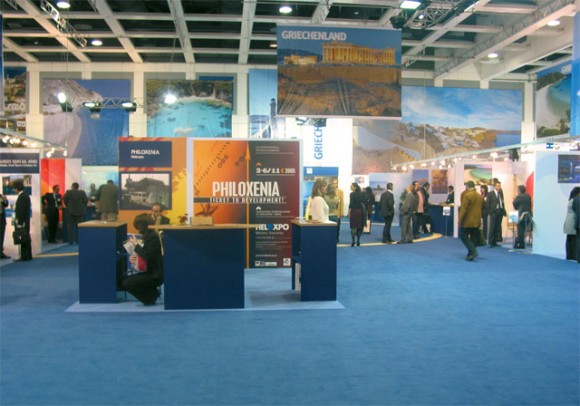 The 3,000 invited guests enjoyed a potpourri of entertainment and sport. Germany’s Chancellorr Gerhard Schroder opened the ITB Berlin, a first for the fair.

In the previous year the total was 6,701 accredited journalists from 84 countries.

This year’s ITB attracted a record number of exhibitors. 10,409 exhibitors from 181 countries and territories showcased their tourism products on a display area of approximately 150,000 square meters within 26 halls. This is a 3.8 percent increase over the previous year, according to event organizer Messe Berlin.

So large is the exhibition that a shuttle service was available for those who opted not to trek.

Delegates, however, complained that the consumer before trade experiment was ineffective. A show as immense as ITB can be quite challenging to tackle. Being that it is the world’s largest travel trade show, the trade exhibitors were obviously tired by the third day, which was the first official day for the trade.

Another issue that was raised was the kind of innocent ethnocentrism that exists at the ITB.

For an example, thousands of delegates attended the official opening ceremony, which was inaugurated by Chancellor Gerhard Schroeder himself. 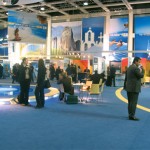 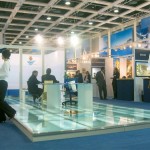 Patras created a strong presentation at this year's fair with an impressive stand to promote the city as Europe's cultural capital next year. Representatives on the stand said they were pleased with the turnout, but it would have been nice to have a program of events to present. 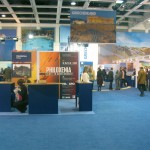 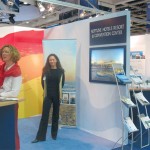 Neptune Hotels on Kos said "we're very enthused and very optimistic for 2005 after the number of visitors to the stand during ITB. We're quite impressed with this year's exhibition." 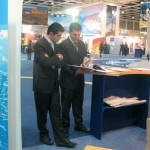 The Myconian Collection on Mykonos, which includes four of the island's leading hotels, said more visitors arrived than expected and that the number of tour operators visiting the stand was surprising. Owners foresee a very good year for their hotels. 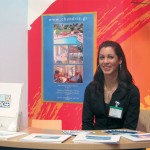 The Chandris hotel group found the fair better than last year and from visitors concluded that more all-inclusive arrivals will arrive to Greece this year and that we'll see double the number of arrivals from the Benelux countries. 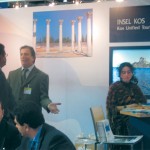 Representatives from the island of Kos said they experienced a strong interest from visitors but cautioned that they would not be sleeping soundly as it appeared much of this year's arrival numbers would be last minute bookings. 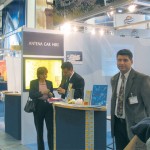 Antena Car Hire said it was the first time the company participated at the ITB fair and that it will most definitely be back next year with an even bigger and better presentation. The company also presented its new subsidiary company, SP Yachts. 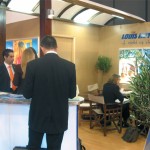 Louis Hotels was very pleased with this year's fair and for once said that the traffic to the Greek pavilion was even better than that to the Spanish pavilion. And like many of the Greek stands, the only complaint was that there just weren't enough company pamphlets to hand out. 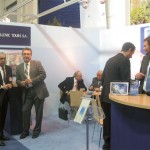 Representatives on the Hellenic Tours stand said agreements were signed during the fair and that a major increase was expected in special interest groups to Greece this year, especially strong were tailor-made tours requested from Austria and Central Europe. 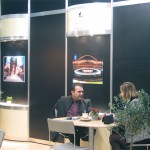 Agora Travel Center representatives said they welcomed very good old clients and some spoke with potential new ones about special groups to Greece this year and incentives, as well as the cheaper school groups. They said visitors expressed an intense interest in Athens as a post Olympic destination.