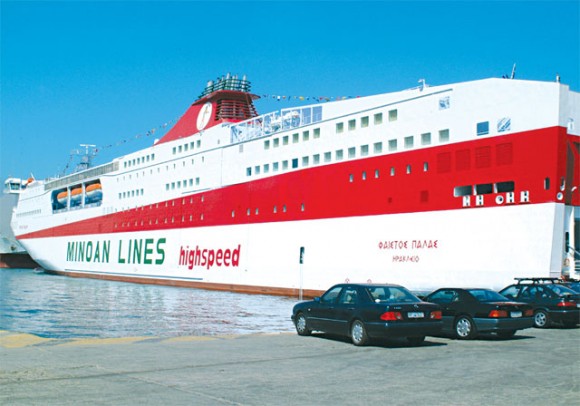 Attica Holdings announced late last month that it had reached an agreement for the acquisition of more than 6.7 million shares of Minoan Lines.

Attica Holdings (Superfast and Blue Star Ferries) announced late last month that it had reached an agreement with an Italian company, represented by Romano Artioili, for the acquisition of more than 6.7 million shares of Minoan Lines. The purchase represents 9.51% of the share capital of Minoan at a price of 3.30 euros per share. Attica says the finalization of the transaction is subject to regulatory approval by the Athens Stock Exchange with reference to block of trading transactions.

The above follows an announcement by the Attica Holdings board early in January when it confirmed the acquisition of 8,974,625 shares of Hellas Flying Dolphins, which represent a 11.6% stake in the company. Prior to the share purchase, HFD, now with the brand name Hellenic Seaways, had 50% of its shares held by independents, 31.5% held by Minoan Lines with another 11.5% held by Minoan supporters, and 7% held by investment companies.

The above followed the appointment of Makis Strintzis as MDF’s managing director – Mr. Stintzis had headed Blue Star Ferries, which is controlled by Attica Enterprises and was owned by the Strinitzis family.

Minoan Lines, however, is not sitting still. Last month it said it sold its 6.81% stake in Aegean Airlines and picked up another 1.72% of Hellas Flying Dolphins from small shareholders for a total share ownership of 33.31%. Press reports say that Minoan executives are now looking at selling Minoan’s 12% stake in Forthnet, one of Greece’s top Internet and communication providers.

Meanwhile, both Attica and Minoan are expected to announce increased profits for their financial year 2004, even though passenger travel on ferries last summer never came close to original projections.

According to financial analysts, Attica Holdings is expected to post a net profit of around 36 million euros, which is some 28% more than that posted in 2003. The increase in profits, however, is not expected to include an increase in company revenue. The analysts say the increased profit is due to better management of the group’s fleet and the benefits derived from the exchange rates between the dollar and the euro.

Minoan Lines is expected to post triple the profits of 2003, which totaled 3.2 million euros. Highly placed executives of the ferry line said this is on top all of the negative factors of the economy that affected coastal shipping last year.

For example, they said the unexpected high price of oil fuel caused just a 5% increase in costs as the company uses heavy fuel, which is cheaper, and the euro-dollar exchange helps lessen the blow of expensive fuel. The company said it also has figured in the possible burden it expects with the results of Hellas Flying Dolphins where it holds a major share.

In a press release, Minoan said “positive results are a product of the successful efforts of management to cut costs within all areas of the company’s activities.”

As well, the ferry line said it managed to increase its share of the market on the Adriatic routes it sails. For the first seven months of this year, Minoan has increased its share on the route to reach 40% in both passenger and vehicle transport.

Overall, the company said that coastal shipping traffic this summer was less than expected by those in the trade but that traffic to and from Minoan’s base port, Heraklion, showed improvement in September. It appears that many Athenians were forced to take their summer vacation in September rather than in August because of the Olympic Games.

Louis Cruise Lines Brings Yet Another Cruise Vessel to Piraeus