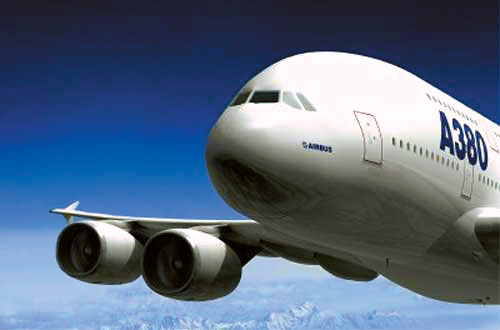 The world last month took its first official look at the biggest airliner yet built during a spectacular ceremony attended by the leaders of four countries, the heads of 14 airlines and operators -Airbus A380 customers- shareholders and thousands of invited onlookers.

A stunning sound and light show -featuring fireworks and illuminated fountains- captured the magical romance of flying and conjured up the spirit and imagination of Airbus, reaching its climax in the unveiling of the A380.

The basic “flying palace,” as dubbed by some, boasts 555 seats in double-decker configuration, four aisles, a restaurant and a bar, but the manufacturer says it’s open to any style preferred by the purchasing airline. Seating, for example, could reach up to 800, or the buyer could cut back on any number of seats and instead include anything from a gym to double beds and everything in between.

The A380 offers 15-20% lower costs per passenger per mile and can fly 10% further than its closest competitor. It also consumes 13% less fuel than its competition – less than three liters of fuel per passenger for every 100 kilometers.

For the moment, Airbus has orders from 14 airlines for a total of 149 aircraft. The first delivery goes to Singapore Airlines and is scheduled for next year.

But something so new and unique comes with unique problems. Because of its size -on one wing you could park about 70 family-sized cars- the A380, up until 2009, can only land at 29 of the world’s airports. The craft took seven years to develop at a cost of 12 million euros, which was funded by European governments. 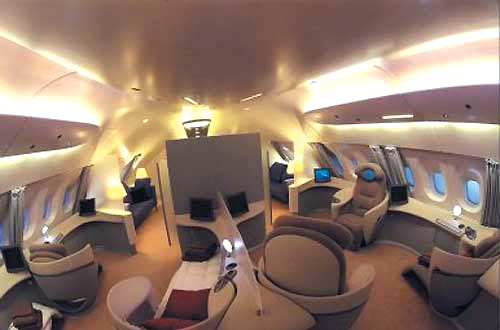 The basic “flying palace,” as dubbed by some, boasts 555 seats in double-decker configuration, four aisles, a restaurant and a bar.

Speaking at the ceremony, Virgin Atlantic Airways Sir Richard Branson said: “This is truly an historic day. It is a proud moment for Airbus to unveil the first A380, a momentous day in aviation’s history and an exciting opportunity for airlines to create new ways of flying for our passengers.”

The capability exists for some airlines to put up to 800 passengers on board their A380s, but Virgin believes it can stay ahead of the competition by looking after the passenger, which is why it will only seat 500 people. “For both business class and economy travelers, we will be introducing a range of new features, because as a small airline, we need to innovate. These will include a gym area, larger bars and a beauty parlor. “We also plan to include a casino and double beds, which means now there will be two ways of getting lucky on board our aircraft,” he joked with reporters. He added: “These innovations will ensure a better travel experience for everyone.”

Mr. Branson says the new Airbus is the most exciting aircraft to be built for 50 years. “The A380 is a beautiful looking aircraft, it’s incredibly quiet and tremendously fuel efficient, which is surprising given it’s the biggest civil aircraft ever built. I believe it is the future of flying.”

Virgin Atlantic Airways has ordered six A380s, to be powered by Rolls-Royce Trent 900 engines, and has options on a further six. The first of the fleet will enter service in spring 2008 and Sir Richard plans to use the first flight to showcase his vision for the future of flying.