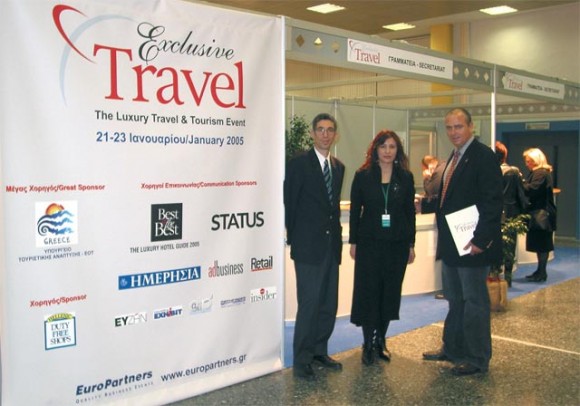 Luxury travel is an industry in its own right representing 3% of elite travelers worldwide who account for 20% of total annual travel expenditures. This segment of tourism is expanding at an increasing rate and shows no sign of slowing down.

“Exclusive Travel 2005: The Luxury Travel & Tourism Event” was the first niche event in Greece dedicated to luxury travel and directed at those who seek luxurious tourism products and services. Based on the models of successful international exhibitions, it aims to fill the gap that exists in the Greek market with the lack of a specialized event dedicated to luxury travel for specific target groups.

Participants at Exclusive Travel 2005, some 60 in all, presented their products and services within a clean and well-managed exhibition environment. Most, but not all, exhibitors came from the hotel trade and covered luxury accommodation in some of Greece’s more popular destinations. Besides destinations, up-market conference possibilities and luxurious accommodations, there were exhibitors that presented transportation and unique travel experiences.

Also on hand were several destinations, such as Mauritius, Tunisia and Slovenia, which presented its world famous Predjama Castle and Postojna Cave. On the whole, Exclusive Travel provided a select audience (the fair was not open to the public, but by invitation only) of high-income visitors, travel professionals and industry representatives a complete overview of luxury travel and tourism possibilities. 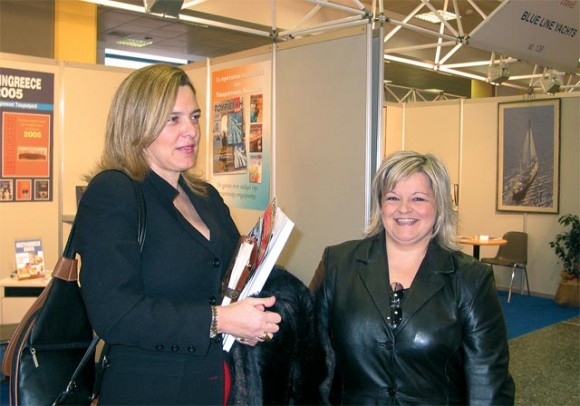 Potential buyers at the fair – Demie Galanou, general manager of Cruiseplan Eurostar; and Vasiliki Kondylarou of CNC International-Dinners Cosmos Club’s planning department Europe – said the nicest thing about the fair was that we met only professionals and we were not overrun by visitors.

Organizers also held prearranged meetings for exhibitors in three meeting halls. Ioanna Tzerachoglou, sales manager for Porto Carras, said she had prearranged 17 meetings but after the first two days of the fair had met with more than 40 potential buyers, answered several direct requests and handed out more than 100 sales kits.

One complaint, however, was concerning the meeting rooms. “I would have preferred a little more privacy in the meeting rooms when discussing with potential clients, and the rooms could have had a much warmer atmosphere,” said Ms. Tzerachoglou.

“Exclusive Travel 2005” took place at ESKA (Helexpo), Athens, from 21 to 23 January 2005, just at the beginning of the after-Olympic tourism season for Greece and the entire Mediterranean region. It was opened Tourism Development Minister Dimitris Avramopoulos. 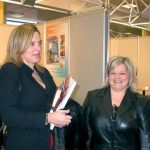 Potential buyers at the fair - Demie Galanou, general manager of Cruiseplan Eurostar; and Vasiliki Kondylarou of CNC International-Dinners Cosmos Club's planning department Europe - said the nicest thing about the fair was that we met only professionals and we were not overrun by visitors. 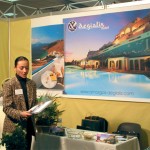 The Aegialis Hotel on Amorgos is open all year around. It includes five traditional buildings and three suites, all with incredible views to the Gulf of Aegiali and the Aegean Sea. The hotel specializes in up-market wedding organization. 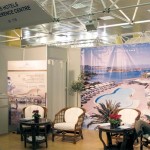 The AKS Hotels & Convention Center stand concentrated on presenting its new center, which opens this May. It will feature 700-delegate and 200-delegate halls, an exhibition hall of 1,200 meters and 14 syndicate rooms. 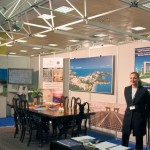 The Capsis Convention Centers & Resort Hotels promoted its three new conference centers, the Marika Capsis 2000 on Rodos; its resort convention center (the only one of its kind in Europe) on Crete and its new cultural and exhibition center in the Athens Maroussi area. 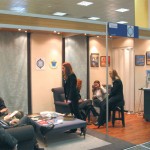 Yades Heritage & Hospitality is a member of the Historic Hotels of Europe and is the first Greek chain of unique hotels that combine historical buildings with the ultimate in contemporary amenities. Its units include elegant manor houses, estates, and villas throughout Greece where guests can experience authentic, local culture. 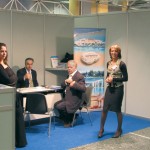 Kipriotis Hotels & KICC boasts, on the island of Kos, one of Europe's most elegant and functional purpose-built convention centers. Its built on three levels and can host up to 5,500 delegates. Its main meeting room holds 2,400 delegates, it has 47 multifunctional meeting rooms and 3,000 square meters of exhibition space. 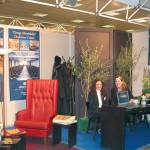 The Marilena G. Mamidakis Group, except for its hotels on Crete, boasts perhaps the most complete conference and cultural complex in the Mediterranean. Its Athinais center in Athens has become a popular venue not only for conferences but also for corporate and social functions that combine high tech with aesthetics. The center includes a cinema, theater and music hall, restaurants and bars. 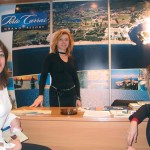 Ioanna Tzerachoglou (center), sales manager for Porto Carras, was just one of many of found the new fair very productive. She said she held more than 40 meetings with potential clients. 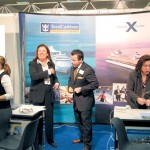 A luxury travel fair must include a cruise representative. Navigator Travel & Tourist Services represents the world's best. It's the international representative for Greece and Cyprus of Royal Caribbean International and Celebrity Cruises, both of which float 28 luxury cruise vessels. Navigator was founded in 1962.