The Louis Group to Set Up Greek Cruise Line 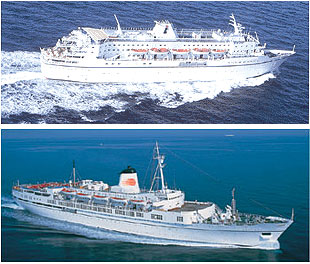 Louis Cruise Lines’ first ships, Calypso and Ithaki, that are to sail out of Piraeus next spring.

Georgos Stathopoulos, the general manager of the new company, says the group’s decision to set up the new company is part of its overall strategy to enter new markets that present major possibilities. He says Piraeus is one of the most important centers for international cruises.

He adds that the recent promotion of Greece during the run of the Olympic Games, and the dramatic development of infrastructure in the Athens area, not to mention the improvements in hotel lodgings, have created a “strong base for the future of tourism arrivals to the Greek capital and we need to offer the foreign visitor increased level of services.”

The aim of Louis Cruise Lines, he says, is to move decisively in this direction with the offer of the right product that will continue to develop and adapt to the needs of the marketplace.

Unfortunately, says Mr. Stathopoulos, the Port of Piraeus has not followed the rapid development that has taken place in the cruise market, but we are determined to work in the most positive way to change this because we believe in the power of Greece as a tourism destination and as a center for cruise development. He adds that his new company will continually expand and develop and create a competitive advantage to attract even larger numbers of tourism arrivals. At the same time, he says, the company will give a special emphasis to promoting cruises within the Greek domestic market and make the Greek tourist love this kind of travel, which is the fastest growing in the world.

“With the close relationships we have with the world’s biggest tourism organizations, we intend to attract customers from new sources, which will provide a general positive result for Greek tourism,” says Mr. Stathopoulos.