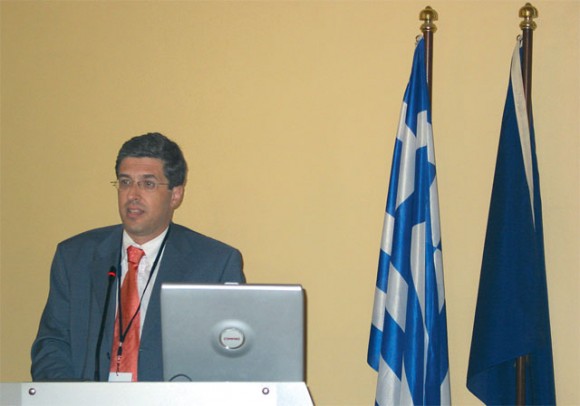 Nikolaos Giannis, president and chief executive officer of the Port of Piraeus, during a Athens Business Club 2004 seminar on nautical tourism.

Ioannis Tzoannos, general secretary for the ministry of merchant marine, told guests during an Athens Business Club 2004 seminar on nautical tourism that he would like to see a close cooperation with the new tourism ministry. In particular he said he would like the simplification and quick implementation of rules for investment and he would like to see a registry for yachts set up. “A registry with simple rules and tax benefits.”

“It is the main passenger hub between mainland Greece and the Aegean islands and Crete as well as the main maritime gateway to the European Union at its southeastern end.”

Mr. Giannis then went on to explain the plethora of development projects that have taken place within the past two years. He said the port now has six passenger terminals (two of which handle exclusively international traffic), several parking areas and a whole range of services to ships on a 24-hour basis all year round.

He added that plans for the central port includes even further operational and aesthetic upgrading. However, up until now, it has managed to achieve phenomenal improvements with new passenger terminals and with several of the existing ones already completely renovated.

As an example, he cited Akti Vasiliadi, which has been developed into an exemplary passenger port area with a modern passenger terminal station. At the same time, passengers will have access to the port by means of the Metro extension and the Athens Light Railway.

Aesthetics and operation of the port, he said, have been radically upgraded with a series of works that have improved the quality of the services provided, he said, and while many of these were completed to coincide with the 2004 Games, much more is still to be done.

Works completed that improve the port for passengers, visitors and vessels include up-market security measures; a network of info kiosks for travelers; a modern passenger terminal at the new Coastal Shipping Area of Akti Vasiliadi; the completion of the Andreas Papandreou ring road facilitating access to the city and the port; the rehabilitation of an old stony Warehouse into a new passenger terminal; the construction of an elevated tramway to enhance mobility within and around the perimeter of the port; the transformation of the old industrial cargo loading facility at the Krakari mole into a restaurant ; The renovation of the SILO building complex to support cultural and recreation activities; and new water supply and sewage systems and extended landscaping works.

The perimeter of the Central Port lies between the “Themistokleous” and Krakari moles. The port has five piers while the total length of quay walls is 8.500 meters and its depth ranges between 7 and 10 meters.

Hopes for Continuation of Cultural Olympiad

The Louis Group to Set Up Greek Cruise Line