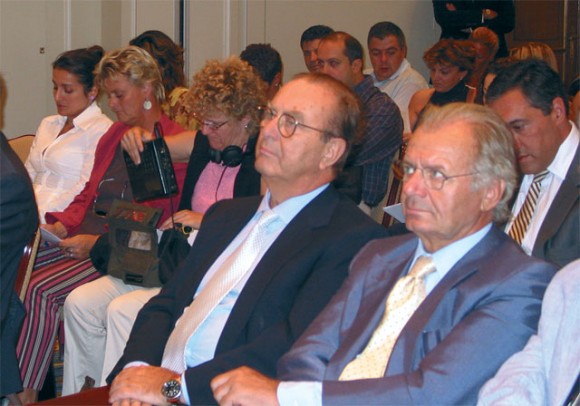 Pericles Panagopoulos, president of the Union of Passenger Vessels, with the honorary president of the Association of Greek Tourism Enterprises, Spyros Kokotos. The passenger vessels union is the newest member of the tourism enterprises association.

The Association of Greek Tourism Enterprises last month urged the government to go ahead immediately with tourism-related infrastructure projects throughout the country, infrastructure works on the same scale as seen in Athens over the past several years. It also warned the government against repeating the mistakes that plunged the country’s tourism sector into crisis in the last four years.

The association’s president, Stavros Andreadis, noted in a press conference that foreign arrivals continued to decline in the months of July and August and set out the measures which the government and the private sector must implement in order to capitalize on the improvement of the country’s image resulting from the Olympic Games.

“The success of the event has created a climate of euphoria, which must not sweep us to overoptimistic predictions. Capitalizing on the benefits of the Games will not be achieved with words but needs hard work from all sides involved,” he said.

“The billions of people throughout the world that watched the Games on television saw an idyllic picture of a splendid Greece… They will naturally expect to experience similar quality when they opt to visit some other tourist area. What are they likely to see there? An almost Third World airport or port, dirty utility areas, roads full of potholes with inadequate if not absent signposting… If the rest of Greece is not soon upgraded in the way that Athens was, all this positive publicity will turn against us,” Mr. Andreadis said.

The latest available data show a decline in the tourism business this year of some 5 percent. By contrast, Spain is up 1.86 percent, Cyprus 4.71 percent and Turkey way ahead, with an estimated 37 percent rise in business. For Greece, a 5 percent decline in arrivals means a 15 percent fall in revenues, due to offers and reduced prices. This year’s fall will also affect next year’s revenues, given that contracts have already been signed at prices at least 5 percent lower than for 2004.

The tourism enterprises association wants action on both the supply and demand fronts. On the supply side, it recommends that the planned new investment incentives law include a combination of financial and zoning incentives to promote the creation of the required special infrastructure. With five golf courses, you cannot compete with Spain’s 250 and Portugal’s 55, said Mr. Andreadis.

On the demand side, which means targeting new markets, he said there was a dire need for marketing and communication consultants. An aggressive demand policy also needs a national air transport policy, he added.

“As long as we do not create the prerequisites for attracting more air carriers to Greece and increase direct connections between our regional airports and foreign markets, anything we do will suffer in terms of results.”

Mr. Andreadis reiterated the call for a strong Tourism Development Ministry, with substantial powers, and urged the prime minister to announce specific measures for realizing the vision of better Greek tourism, stressing the fact there will be no better time than now.