“I was here two years ago and the difference is just incredible. There’s just one word for it: Wow! This is proving to be a fantastic Olympic Games with fantastic venues that will serve the City of Athens and the country of Greece for generations to come.” – New York City Mayor Michael R. Bloomberg.

Tourism Development Minister Dimitris Avramopoulos continually emphasizes the importance of changing Greece’s tourism image, and at every press opportunity he stresses the importance of Greek history and culture. Millions of guests during the Athens 2004 Games have had a taste of the best Greece has to offer and they will no doubt spread the word. 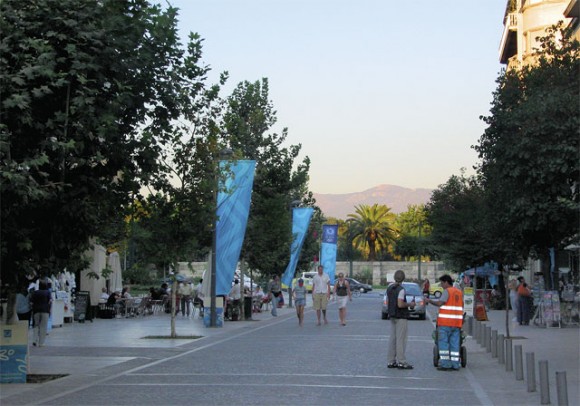 The City of Athens, except for being dressed in its finest, had invited more than 600 artists and performers to celebrate the homecoming of the Olympics and to emphasize the spirit and values behind the games – peace and an international exchange. The cultural program showcased not only Greek heritage but also the artistic traditions, music and dance of peoples from around the globe – on a single day it was not rare to see some 35 cultural events fill the squares and street corners of Athens.

Athens has been in a party mood day in and day out since the beginning of the Games. The center of the Greek capital during August, and particularly the Plaka and Syntagma area, was flooded with people night after night, taking a stroll, having a drink, enjoying a public event, be it a theatrical performance or an exhibition, having a frappe, chatting with friends, relishing local cuisine or simply watching the world go by. And wherever they were, they enjoyed the surroundings.

Athens has been transformed. But it’s not just the unaccustomed cleanliness, the new infrastructure or the impressive light effects that made the difference. Museums, restaurants, shops, banks and the public transport systems have extended their opening hours to suit their customers. And perhaps more important, Greece has taken back its reputation for warm hospitality, thanks to the thousands upon thousands of Greek volunteers who have gone out of their way to help domestic and foreign visitors, not for profit but because they want visitors to love and fondly remember their city and country.

“I don’t know, I can’t explain it,” said Canadian visitor Jacqui MacIntosh, “I have only been in the city for a little over a week and I feel so very much at home. I can hardly wait to come back again next year so I can stay longer.” 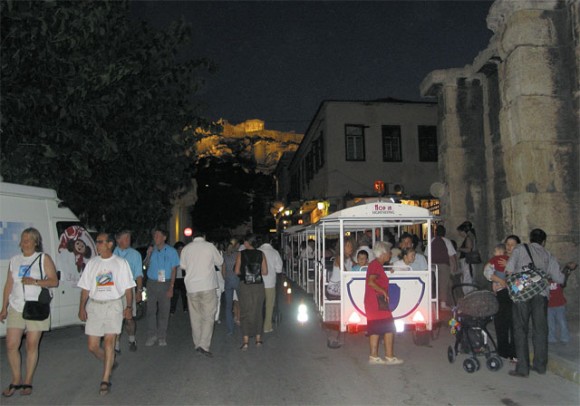 The city has even leased a quaint blue and white mini-train for daily tours of the city’s historic center free of charge between 10am and 5pm from the Tower of the Winds.

Others agree and talk also of the excellent organization of the Games with trains that run on time, buses that do not make customers wait in long queues in the summer heat, the impressive state of the city’s subway system and the non-stop praise for the Olympic Stadium and Olympic installations. 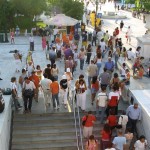 While Athenians were away for their vacation, swarms of tourists from around the world took over central Athens. Most flocked to the Syntagma and Plaka areas day and night. 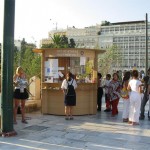 More than 3,000 City of Athens volunteers man the more than 60 information booths set up around the city's center and the tourists love it. 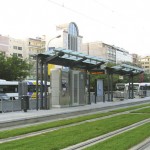 Modern infrastructure works include the city's new tram system that has proved invaluable for travel to the Hellinikon, Faliro and Glyfada Olympic installations. 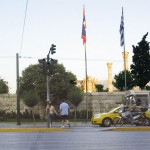 The city of Athens has created ramps for all of the central city walkways and pedestrian crosswalks and their now synchronized pedestrian traffic lights. 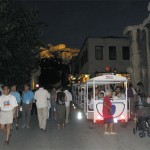 The city has even leased a quaint blue and white mini-train for daily tours of the city's historic center free of charge between 10am and 5pm from the Tower of the Winds. 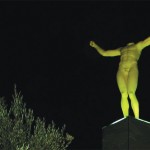 New attractions to peak the visitors' interest are spread throughout the city's center. 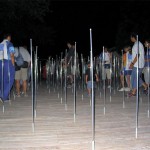 New attractions to peak the visitors' interest are spread throughout the city's center. Some will stay while others will disappear as the Games wind down.