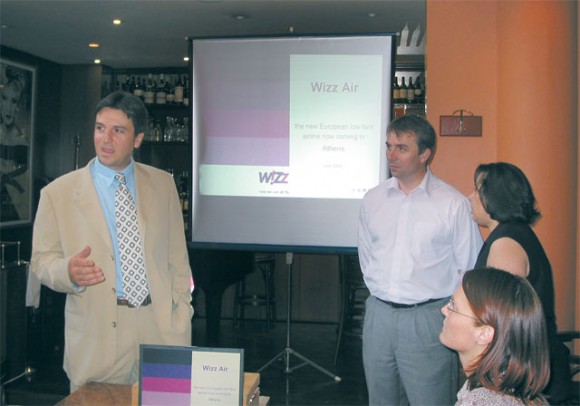 Wizz Air, a new European low-cost airline that focuses on the Central and Eastern Europe markets, inaugurated Athens-Budapest flights last month. The CEO and general manager of Wizz Air, Jozsef Varadi, said he expects to fill 2,000 seats per week out of Athens and 100,000 seats annually.

On a general scale, he said the airline’s aim is to carry more than two million passengers in the first year of taking to the skies. The first scheduled flights took off this past May.

The plan to launch Wizz Air was only conceived in June of last year when six people with a wide range of airline expertise as well as successful track records from across different industries teamed up with Jozsef Varadi. In just three months Wizz Air was registered as a company in London and operating subsidiaries were established in Hungary and Poland.

As we go to press, the airline is adding flights to Brussels (4/week) and Stockholm (3/week) and frequencies on London will go up to 11/week and to daily on the Rome, Paris and Barcelona routes.

Wizz Air has a young Airbus A320 fleet of six distinctive aircraft of 180 seats each.  With multilingual crews from operational bases in Katowice and Budapest, the Wizz Air fleet now has a network of 11 destinations.

A further three aircraft will be added later this year, which will increase the number of destinations as well, said Mr. Varadi. The average age of these aircraft is 1.5 years. For the immediate future, he said he plans to introduce about 10 brand new aircraft per year, which means that by 2007 we will have a fleet of 35-40.