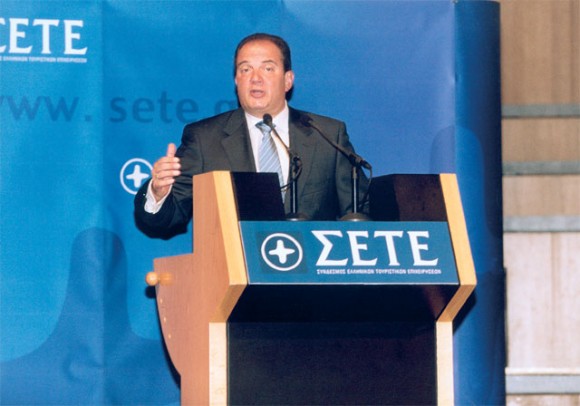 Prime Minister Kostas Karamanlis showed his personal interest in the tourism sector last month when he opened this year’s general assembly of the Association of Greek Tourism Enterprises. During his speech, he labeled tourism as a sector of national importance for the country’s economic strength, and a sector that provides benefits to all.

He said that his government would implement policies to boost the country’s traditional tourism activities while also creating new forms of tourism that would revolve around Greece’s vast cultural wealth. These policies, he said, would lead to long-term growth, to the extension of the of the tourism season, and the introduction of tourism activities to parts of Greece where it has never before existed.

The first step has been taken, he said, with the establishment of the tourism ministry, which will be named the Tourism Development Ministry. (The tourism ministry, headed by Dimitris Avramopoulos and his deputy minister Anastassios Liaskos, has composed a draft bill that outlines its responsibilities and those to be undertaken by Hellenic Tourism Organization. Mr. Avramopoulos, at a later press lunch, said quarters near the Onasis Heart Center are being looked at and if all goes well the ministry, the tourism organization and Hellenic Tourism Properties will be housed there within the next three months.)

Among the many points touched on by Prime Minister Karamanlis was that of inter-government cooperation. He said important issues that require joint decisions would be collectively dealt with by the ministries of tourism, public works, finance, and public order. These collective decisions will relate to issues including the designating of national and local land planning for primary and secondary tourism infrastructure projects and the issuing of presidential decrees. The prime minister also said he was upgrading the National Tourism Council.

Similar cooperation will be sought between regional authorities and the various sectors of tourism so as to initiate activities that would allow for the expansion of alternate forms of tourism in every region of the country.

Other tourism issues mentioned included: the outlining of geographical areas which have priority for tourism growth; the development of tourism policies that can support the sector’s activities; and the establishment of incentives for tourism in mountainous areas and islands with the aim of providing better living conditions for local residents.

In a bid to strengthen the Hellenic Tourism Organization, he said top priority would be given to the promotion of Greek tourism assisted by every means of communication. As well, he said that the government is already working at forming a post-Athens 2004 Olympic Games strategy that would focus on the world’s largest sporting event and the plethora of Olympic infrastructure projects that have taken place here.

“The guide for our strategy is the creation of a tourism identity that would establish the uniqueness of Greek destinations and ensure the international acknowledgement of our tourism products,” said the prime minister. “We will link our tradition with modern demands.”

(Later in the month the prime minister announced the new European Union Constitution that had been signed and stressed the importance for Greece of the inclusion for the first time of tourism in the EU constitution.)