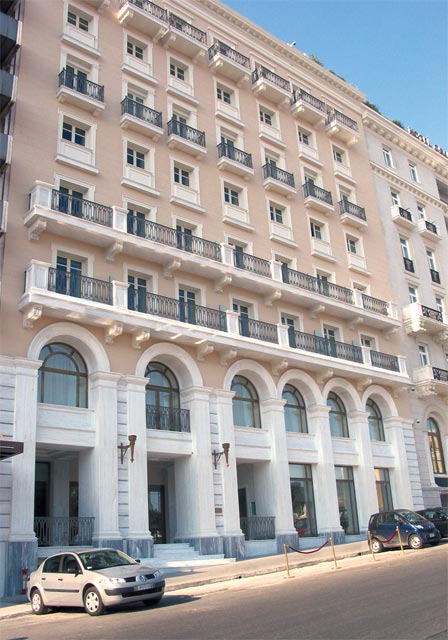 After almost a decade and one-half of silence, the historic King George II hotel on Syntagma Square opens its doors to the world’s most demanding of hotel guests under the “Leading Hotels of the World” banner. The five-star unit, following radical renovations, is now more luxurious than during its days of glory some 150 years ago when its halls rang with laughter as the meeting place for King George II’s court.

Its new owner, Greece’s biggest hotel chain, Grecotel, spent some 30 million euros to strip the old building down to its bare frame and rebuild to uniquely high standards.

Grecotel, which leased the property from Eurobank for a 40-year period, says it insisted on only the highest quality materials in every phase of the renovation. All furniture, equipment and facilities are of the utmost quality, and each room is designed and decorated so as to permeate its own special character.

The King George Royal Suite, for example, takes up the entire ninth floor and includes its own private swimming pool that faces the Acropolis. An experience afforded nowhere else in the world.

Another unique experience is the unit’s Tutor Hall restaurant, which is perhaps the most plush area of the entire hotel, according to some. To ensure its cuisine lives up to the atmosphere, Grecotel was able to entice Europe’s most famous chef, Alain Ducasse, to prepare the Tutor Hall menu.

And besides all five-star amenities, and then some, the King George boasts rich conference halls that accommodate 600 people. The main hall looks out on Syntagma Square.

AKS Conference Center Opens Next May