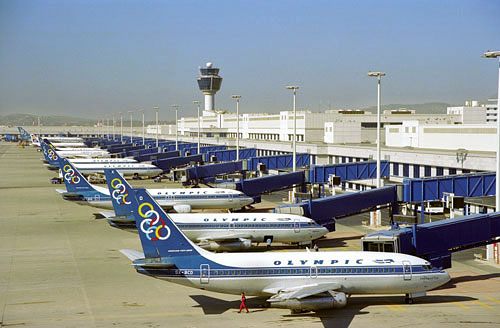 Athens International Airport’s “Eleftherios Venizelos” was recently voted the best and safest airport of its kind in Europe and the second best in the world.

Athens International Airport’s “Eleftherios Venizelos” was recently voted the best and safest airport of its kind in Europe and the second best in the world, according to an independent survey carried out by the Global Airport Monitor of the International Air Transportation Association.

In the competitive airport size category from 5 million to 15 million passengers per annum, Eleftherios Venizelos holds the first ranking position in Europe in “Overall Passenger Satisfaction” for the second consecutive year, and ranks second in the world behind the Airport of Cape Town, which was recently upgraded with a brand new terminal.

For the year 2003, the Athens airport maintained the second position amongst all participating European airports -regardless of airport size category- behind the state-of-art Airport of Copenhagen.

Furthermore, the airport has been appointed as a European leader – regardless of airport size category – across a wide range of service categories. More specifically, Athens Airport came first on Security inspection, Cleanliness of the airport terminal, and Comfortable waiting areas/gates.

The airport’s management company, Athens International Airport, will be awarded for its distinctive performance at the AETRA awards ceremony that will take place at the ACI World Conference in Lisbon, in October 2004.

Separately, Athens International Airport last month presented measures to confront the increased aircraft movement expected within the month of August. During the Athens 2004 Olympic Games, the airport says it expects one aircraft arrival every minute compared with today’s one arrival every minute and one-half.

In all, during August, AIA says some 20,600 aircraft will land here with more than 2.0 million passengers, compared with about 1.5 million hosted by the airport in August of last year. The airport says it will have some 2,000 specialists on hand to cover security on a 24-hour basis.

Meanwhile, the airport recently announced that its passenger traffic for the first quarter of this year increased substantially by some 12.5%. During January, AIA’s passenger traffic grew by 7.4%, while February showed a more favorable development posting an increase of 8.1%.

And the impressive rise of 20.7% in the course of March, although influenced by both the Greek Parliamentary elections and the depressed 2003 traffic (war in Iraq), illustrates that the positive trend observed since the beginning of the year, has been sustained and enhanced.

The majority of the main international routes presented strong growth during the first quarter of the year, marking a favorable trend of incoming international traffic. London is steadily the top destination out of Athens and achieved a traffic rise of 8%, while Larnaca, holding the second place, enjoyed a growth of 12%.

Amongst the top 10 markets, Paris, ranking third, posted the highest increase of 18%. Cairo, New York and Istanbul hold the top three positions within the non-European ranking chart, and all marked significant levels of growth (34%, 17% and 17%, respectively).

AIA says that the passenger traffic rise of 12.5% during the first quarter of the year “is well above the overall European trend of 7%, which indicates that the observed positive trend does not only reflect the upturn of the aviation industry, but also signifies AIA’s successful aeronautical strategy.”