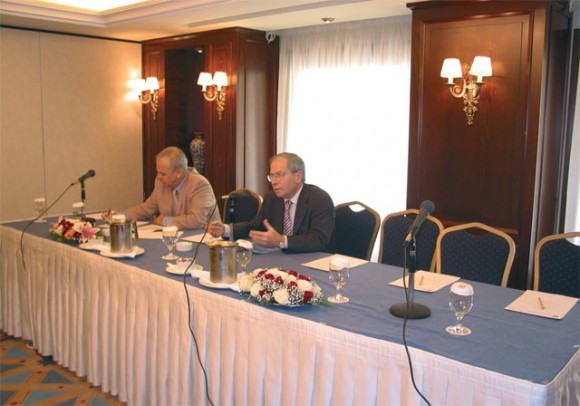 Dimitris Marantos and Dinos Frantzeskakis, of the Association of Airline Company Representatives.

The Association of Airline Company Representatives last month called on government to change present legislation so as to allow a second international airport to be created in the Athens area because, according to the association’s president, Dinos Frantzeskakis, the Athens Airport is the most expensive airport in Europe.

“And it has just announced a new increase of 3.5% for services afforded to airline companies, and a 29% increase in the security tax for passengers,” he exclaimed. “And because airport charges are too high charter flights to Athens have all but disappeared.”

(Athens Airport says the 29% security increase comes to a mere 70 cents, that it is hardly the most expensive European airport of its size, that the airport last year received IATA’s Eagle award for the financial supportive measures to airlines, and that charter flights can now fly direct to island destinations instead of Athens.)

Mr. Frantzeskakis suggested government renew its agreement with Athens International Airport, which has a 30-year concession, through relevant  legislation and compensate the airport accordingly. Along with this, he wants to see the cancellation of the “excessive tax on airline tickets (spatosimo) and a 30% reduction in airline airport charges.”

As well, the association placed a particular emphasis on services at Greece’s 43 regional airports where the association members say services for both passengers and airlines are less than acceptable.