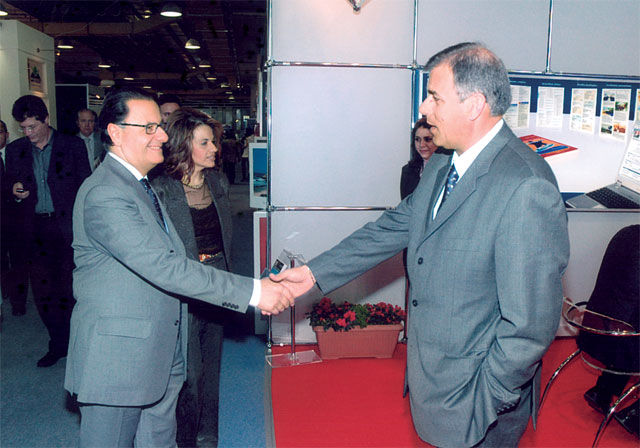 Employment Minister Panos Panayiotopoulos and Panorama’s manager, Elena Magaropoulou, greet GTP’s Thanasis Cavdas. The two were the first of a parade of politicians, including Tourism Minister Dimitris Avramopoulos and Athens Mayor Dora Bakoyianni, and prefectures that had taken the time to visit the stands at this year’s Panorama.

This year’s Panorama, the ninth, which ran from April 22-25 at the Piraeus Port Authority Exhibition Center, was dedicated to the Athens-Attica area and the network of Olympic Cities. But like the tourism picture in general this year, Panorama left exhibitors and visitors with mixed feelings.

Most exhibitors, many of which are counting on domestic travel this year, were disappointed in the lower number of visitors to this year’s fair, a drop of more than 13%. This was considered even more worrying since the fair concentrates on domestic tourism and its possibilities, especially with regards to special forms of tourism and regional tourism.

On the positive side, many of the exhibitors said they were able to discuss and even conclude deals with other professionals in the trade who were also exhibitors or visitors to the fair: And on a much larger scale than in other years.

There were also some mixed feelings on this year’s domestic tourism study released by Kapa Research. The annual study showed that one in two Athenians would vacate Athens during August and head for less crowded shores. And although this study concentrated on the Attica area, it said that 40% of Greeks would take a vacation this year, with more than half doing so during the month of August. As well, it said that most all would take the same length of holiday as last year. 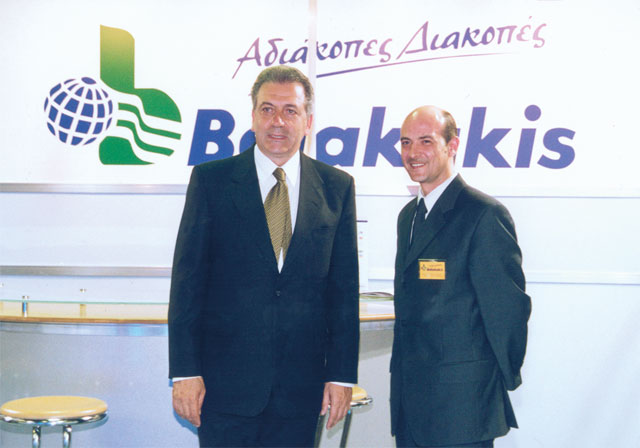 George Balakakis of Balakakis Incentives & Worldwide Tour Operators with Tourism Minister Dimitris Avramopoulos. The Balakakis stand was one of the more popular stopover points for this year’s visitors and most went away with information on package holidays abroad as the company specializes in travel to some 22 countries.

But according to research released recently by Greece’s major consumer protection group, at least one in three Greeks has no intention of taking the traditional summer holiday this year, mainly to save money. The Consumer Institute (INKA) said a total of 36 percent of respondents in a poll it carried out said they would be staying put this summer.

Some 71 percent said they could not afford to go on holiday, 19 percent said they had too much work and 8 percent cited family commitments. But even of those who had plans to leave home during the summer, 44 percent proposed heading for their own second home in the countryside, while 29 percent intended to stay with family or friends. Only 27 percent said they would be lodging in a hotel or in rented rooms. 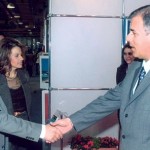 Employment Minister Panos Panayiotopoulos and Panorama’s manager, Elena Magaropoulou, greet GTP’s Thanasis Cavdas. The two were the first of a parade of politicians, including Tourism Minister Dimitris Avramopoulos and Athens Mayor Dora Bakoyianni, and prefectures that had taken the time to visit the stands at this year’s Panorama. 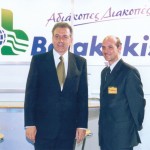 George Balakakis of Balakakis Incentives & Worldwide Tour Operators with Tourism Minister Dimitris Avramopoulos. The Balakakis stand was one of the more popular stopover points for this year’s visitors and most went away with information on package holidays abroad as the company specializes in travel to some 22 countries. 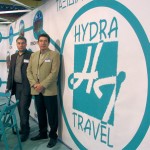 Hydra Travel’s sales manager, Manos Matsakis, with the company’s owner and general manager, Tassos Stavropoulos. Piraeus-based Hydra Travel had a plethora of staff on hand to promote the company’s popular exotic all-inclusive vacations and well as special tourism packages, such as diving and motor sports holidays. 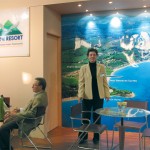 Although consumer visitors to the Sani Resort stand were numbered, the resort’s conference sales manager, Sofia Kalomenidou and its reservations manager, Konstantinos Zarkadas, were pleased with the number of tourism professionals who dropped by during the fair for information on cooperation possibilities. 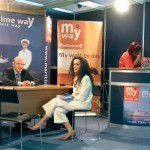 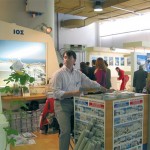 Ios, on the Cyclades pavilion, was just one of the many domestic destinations exhibiting at the fair and as in past years the majority of consumer traffic headed directly for the prefectures areas. In total, there were 602 exhibitors at this year’s Panorama, compared with 592 the year before. 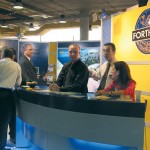 Although a good number of consumers stopped by the ForthCRS stand to check it our and see what it offered, specialists on the stand mostly welcomed professionals interested to learn more on ferry booking possibilities through their offices. 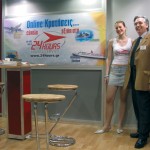 24 Hours Tourism Travel’s chairman, Antonis Seretis, with just one of the many and very attractive female hosts that worked the stand all during the fair. Besides package travel for domestic and foreign destinations, the company specializes in hotel bookings and honeymoon packages. 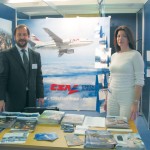 Czech Airlines’ sales manager for Greece, Jerry Spyropoulos, and the airline’s operation’s manager, Angela Gerakiou, welcomed a number of professionals to the stand interested in checking out the possibilities of package travel to the Czech Republic. CSA is a SkyTeam alliance member. 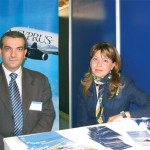