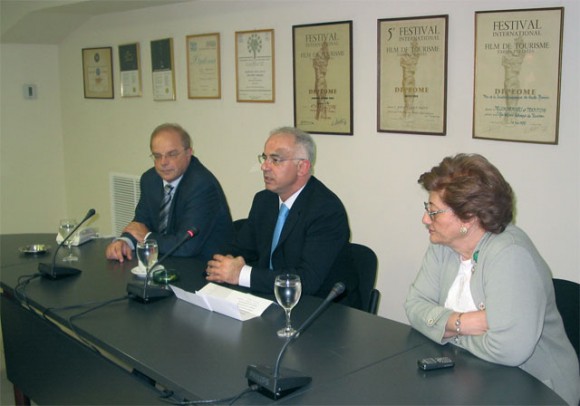 At his first confrontation with the press, Hellenic Tourism Organization President Haris Kokkossis said that he expects this year’s tourism arrival figures to stay at the same level as last year. (In an interview days earlier, the newly appointed president had said that he expected arrivals to drop some 8%.)

Mr. Kokkossis said during the first weeks of his tenor he would concentrate on a tourism communication program. One that would include specific welcome messages to visitors on their visit to Greece, whether that be by way of personal contact or through such channels as the Internet.

Both Mr. Kokkossis and Deputy Tourism Minister Anastassios Liaskos, who presented the new president, pressed the point that they and the prime minister consider tourism the “steam engine” of the Greek economy, “but until now this major advantage has not been utilized.”

Mr. Liaskos said he didn’t want to harp on the mistakes of the previous government, but in all truthfulness it did not adopt a tourism strategy and did it take any initiatives to tie the Athens 2004 Olympic Games with Greek tourism. “We now must do everything in our power to reverse the present dismal tourism situation where Greece is the only country to hold the Olympic Games and not have a positive tourism picture.”

Some measures being taken, he said, include personal visits by the tourism minister to foreign tour operators and the implementation of the Hellenic Tourism Organization’s advertising and promotion program abroad, which began in early April. He said as this year’s arrivals would depend largely on last minute bookings the promotion program promises to make a major difference. An additional promotional program, which will be tied to the organization’s program, got off the ground late last month. Concerning Hellenic Tourism Properties, he said that the company would be reorganized as a mechanism for controlling and managing Hellenic Tourism Organization properties. He added that all contracts signed up until now will be reviewed, especially those that appear to have some legal difficulties.

For the future, he said the ministry was ready with new legislation, which sets up the tourism ministry and defines its responsibilities (at a separate event, Tourism Minister Avramopoulos said the new legislation would be ready before the end of May).

Much of the strategy would concentrate on the creation and the promotion of new forms of tourism -Mr. Avramopoulos said at a recent tourism event that the government would help develop no less than 16 alternative tourism activities in order to attract more visitors and lengthen the tourist season- a workable tourism research and promotion program, a radical change in the way Greece participates at international tourism exhibitions, and a change in the present situation where the country’s prefectures handle tourism company approvals and their tourism promotion programs.