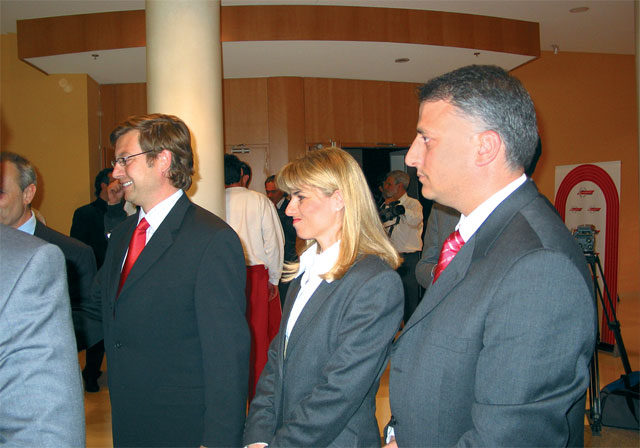 At a reception after presenting the company’s “Superfast Team” are Alexandros Panagopoulos, president and managing director of Superfast Ferries and his sister, Irini, with Blue Star Ferries’ advertising and marketing director, Dionyssis Theodoratos.

The Evgenidou Foundation Athens Observatory was the venue for one of the most impressive press conferences this year and was organized by Superfast Ferries to present the company’s Superfast team of track and field stars. This year’s team includes five of the most promising athletes in Greece.

Superfast, since its founding in 1995, has been a major supporter of Greek track and field athletes and one of   first Greek companies outside the athletic field to do so. Superfast also changed the country’s coastal shipping sector with its continual adoption of new, modern vessels and set an example for all to follow. And it’s a company that soldiers on posting successive records.

After tippling its net profit last year, the company continues in the same vein this year. Net profit for the first quarter, before taxes and depreciation, increased by a whopping 284% when compared with the same period last year. Sales for the period were up 7%.

Flying Dolphins Back in the Black