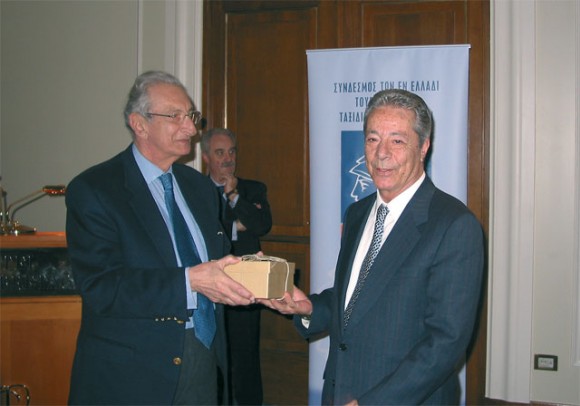 Former president of the Hellenic Tourism Organization, John Stefanides, hands the Hellenic Association of Travel & Tourism Agents’ honor award to Christodoulos Sbokos of Sbokos Tours, Heraklion, Crete, for his more than a quarter of a century of service to the travel trade.

During the recent annual general assembly of the Hellenic Association of Travel & Tourism Agents, almost a dozen special guests took to the podium. Most of the speakers were representatives of the country’s political parties who, without exception, spoke on the importance of tourism to Greece’s general economy.

And as is customary, the association handed out awards to members that have been instrumental in upholding proper business practices during decades of service to the industry. This year, the honor awards went to Tassos Stylianopoulos of Athens-based Navigator Travel, Dimitrios Pithis of Athens-based Argo Travel and Christodoulos Sbokos of Sbokos Tours, Heraklion, Crete.

Later, during a presentation by Michel de Blust, secretary general of the Group of National Travel Agents’ and Tour Operators’ Associations within the EU, caused a number of participating travel agents to wonder who the man was actually working for. His speech, on the airline passenger traffic and how it affects travel agents and their customers, appeared to have been written by the airlines and not an executive of a group that is supposed to represent the general travel agent with Europe, said one travel agent. 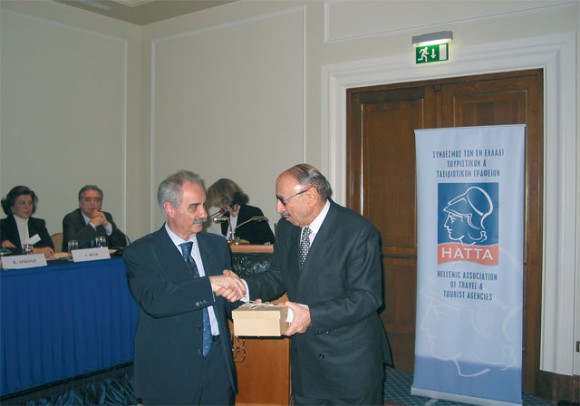 Hellenic Association of Travel & Tourism Agents’ president, Yiannis Evangelou, hands over a special honor award to Dimitrios Pithis of Argo Travel for his decades of service to the Greek tourism sector. Argo Travel was first founded in 1953.

In essence, said the agent, Mr. de Blust attempted to explain that airlines are having a very difficult time financially and that the travel agent that must carry the burden. He said that the airlines had no choice but to cut expenses and the most logical way was to reduce monies paid to travel agents.

The speech caused quite an uproar as association members have been working continuously over the past months to stop airlines from cutting commissions to starvation levels. One member jumped up and asked why is it that such a huge EU group could not concentrate on helping travel agents across Europe to confront the commission problem. Mr. de Blust replied that his association was small and unable to do much.

“Excuse me,” said the Greek Hatta member, “but you run the biggest travel association in the world, one with over 75,000 members.”

Mr. de Blust replied: “Actually we have over 80,000 members, but I work out of a very small office.”