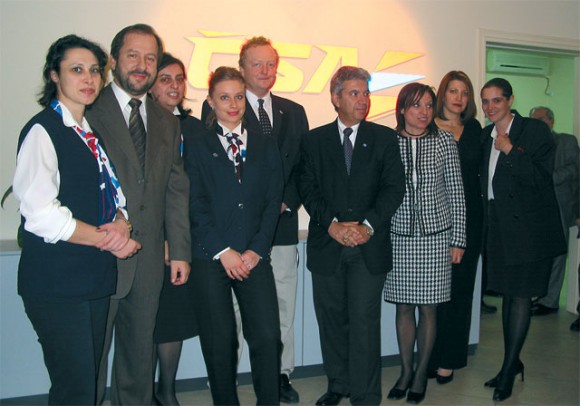 Korean Air, a SkyTeam alliance member, begins flying between Prague and Seoul, South Korea, as of May 22 with Czech Airlines as its code-share partner. The Czech flag carrier will offer its passengers flights to Seoul and will also be the general agent for cargo.

The Korean Air/CSA code-shared flights will connect Prague with Seoul every Monday, Thursday and Saturday.

CSA has blocked space on all these flights operated by a Korean Air Airbus A330-200. With this agreement, the Czech carrier will appear in South Korea for the first time in its history thanks to its SkyTeam membership. The regular flight will arrive in Prague at 5:10 in the afternoon, which will allow passengers to connect to early evening and evening CSA flights to almost all European destinations.

Czech Airlines had been Korean’s general agent for cargo for several months prior to the code-share flight to Seoul. “So far, we have been cooperating off-line,” says Kamil Slavik, CSA’s cargo director, “we’ve been carrying Korean Air cargo to Prague in trucks and dispatching it onwards on our flights.

“Now, we are beginning on-line cooperation and we will be handling cargo from Incheon Airport to Prague from where we can transport it to onwards destinations by air or in trucks,” he says.

Incheon Airport near Seoul is one of the largest and most modern transit hubs in the world. It was opened for operations in March of 2001 and offers the best connections in the Asian and Pacific region. As the geographic center of the region, the airport is located almost the same distance from Tokyo and Peking — a two-hour flight.

More than 40 cities may be reached within a four-hour flight, and more than a hundred million people live in the area within 1,000 kilometers of Incheon.

CSA, which recently celebrated its 80th anniversary, operates 160 daily flights to 69 destinations in 43 countries. The airline is now marking out a long-term development strategy that’s based on expansion due to the country’s entry into the European Union.

Last year the airline had an envious seat load factor of 72.70% and increased passengers carried by some 17% over the year before to reach 3.6 million on 27,000 flights. Madrid and London were the most desired CSA destinations.

Locally, CSA is one of the busiest foreign airlines with a route to Athens and Thessaloniki. Last year, it carried almost 32,000 passengers to and from Athens. Since 1997, the airline has carried about 60,000 passengers on the route and has continued to post a steady annual increase — December proved the busiest month for the airline. A similar record is held for cargo, which has jumped from 40,000 to 113,000 tons.

On its entire network, CSA increased its number of flights by more than 2,600 last year. Peter Jusko, vice president of flight operations for the airline, says that last year’s results were very encouraging. “The interest in CSA is growing as is our offer of destinations and numbers of connections. Last year we added five new destinations to our network and also increased the number of frequencies to selected holiday and business destinations in Europe.”

Seaplane Service for Greece As of May