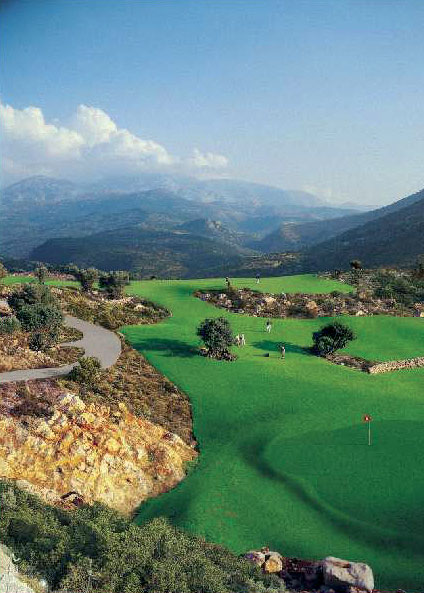 Greece’s newest golf course on the island of Crete.

The Greek tourism sector, struggling to defend its share of the market against cheaper rivals such as Turkey and other Mediterranean nations, is eager to stretch its season beyond the summer months and become more than a sun-and-sea paradise for holidaymakers that are on a budget.

“Greece can be the destination for teeing off and not just for summer activities such as swimming and sailing. It has the prerequisites for the great game of golf to be played all year round,” Stratos Papadimitriou, chairman of the Hellenic Centre for Investment (ELKE), told a recent conference on golf investment and real estate in Athens.

But to the dismay of tourism professionals, politicians and local bureaucrats are apparently ignorant of the potential rewards of investment in the golf resorts needed to attract international visitors.

“I don’t believe this Greek government has the slightest interest in the game of golf,” Alan Egford, European PGA member and Greek national golf team coach, told the conference.

The possible payoff for Greece, which aims to double annual tourism receipts to 20 billion euros by 2010, looks impressive on paper.

Spain, a rival Mediterranean tourism destination, has 270 golf courses and the sport brings in an estimated $3 billion a year. In the United States, the world’s leading market with some 40 million golfers and 17,000 courses, the sport and related businesses account for some 6 percent of gross domestic product, more than gambling, the film industry or mining.

By contrast Greece, with only six courses, remains an untapped market for golf buffs and Greeks appear to have little interest in one of the world’s most popular sports. According to recent data, only about 1,500 Greeks play the game.

“Greece is missing out on billions — not drachmas, and not dollars but pounds. That’s an awful lot of money,” said Mr. Egford. The Greek Association of Tourist Enterprises (SETE), in its long-term plan for the sector, says that Greece should add some 40 new courses by 2010 in a bid to lure higher-spending visitors who might choose to travel outside the high summer holiday season.

But many consider the plan as way too optimistic given the lack of official support and the non-existence of a domestic golfing public. Yet, golf-related investments should also help to sustain strong economic growth after the Athens 2004 Olympic Games.

A number of new golf resorts are in the pipeline, with the most ambitious a 750-million-euro ($931.9-million) development proposed by Britain’s Loyalward Group on a 26,000-square-meter area in northeastern Crete.

The Cavo Sidero year-round resort, expected to create 3,000 jobs, will include two 18-hole golf courses and one nine-hole layout, along with facilities for water sports, shooting, tennis and arts and entertainment.

Experts remind that creating golf courses is not enough.

They have to be flanked by other attractions, such as spas, on large plots of land in order to attract year-round golfers and their families. But such ambitious projects are bogged down because of complex land and licensing issues and bureaucratic hurdles, while Greek authorities so far appear to have done little to encourage potential investors.

For development to proceed, separate approval is needed from Greece’s Development Ministry and national tourism board before screening by archaeological, forestry and environmental authorities and applications for a host of other licenses and permits.

Buying land is also a daunting task. It is not uncommon for a 200-acre site to have 300 owners, some of whom may be involved in complicated family legal tussles over ownership, while others simply do not want to sell or demand high prices once they discover development is planned.