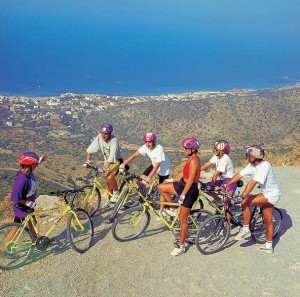 Some 46 speakers, through case studies, showed how important and viable sports is to a country’s tourism sector during last month’s International Association of Scientific Experts in Tourism’s (AIEST) 53rd world congress held at the Divani Apollo Hotel in Kavouri September 8-11 on the theme “Tourism and Sports.” The congress was opened by Development Minister Akis Tsohatzopoulos.

During the 4-day congress, speakers cut deeply into every form of sport and analyzed how each pertains to tourism. In general, they said that sports tourism can be broadly defined as including travel away from one’s prime residence to participate in a sport activity for recreation or competition, travel to observe sport at the grassroots or elite level, and travel to visit a sport attraction such as sports hall of fame or water parks.

They said that this definition suggests that most tourism activities contain some elements of sports that can be placed in such categories as sports resorts, attractions, cruises, cruises, tours and events that cater to athletes, active sportsmen, leisure sportsmen, sports event travelers, sports vacationers, outdoor recreationers, sports day trippers or simply the all-inclusive club tourists.

But both sports and tourism lack a precise definition. For example, leisure sports refer to any form of physical activity be it playing competitive tennis or a passive sport such as walking.

Based on a German travel survey in 2002, delegates were told that more than 60% of all Germans claim to pursue sports activities during their summer holidays. This was broken down into more than one-third saying that swimming, hiking, and soft sports activities were their key activities. A mere 5-10% said that sports was a major motive for travel.

Similarly, it was found that event travelers or spectators as passive sports tourists, constitute a very small percentage. Only 1-2% travel as a sole motive to sports events. There was no information on sports business travel and sports is generally considered unimportant by tour operators and destination planners.

A very like picture was found in a recent Travel Industry of America report released this year. It found that travel for sports events was less than six percent. Softer forms of sports travel, however, reached as high as 18% of travel with an upward trend in fun and adventure being a plus to any vacation.

Speakers at the congress concluded that soft sports activities dominate in sports tourism and that there is a strong trend towards diversification of sports in terms of adding new dimensions and individualized experience in the sports product.

They added that the rise in golf as a major branch of sports tourism, while tennis and skiing are becoming less popular, is only marginally due to value changes and a lot to do with an aging population. As an example, they cited the tremendous boom in wellness and other forms of therapy tourism, which clearly reflect both the mid-life crises and population aging that’s now typical of many Western societies.

With regard to urban tourism and sports, youth dominates here. Some, they said, want to see local sports and others want to participate in them. Others want to bike or roller skate around the city. These sports devotees are often young tourists with physical skills and consider this a way to get into the heritage of the city. The experts said this should be tackled by a city’s destination manager and by incoming agencies.

Major sports events were also analyzed. It was found that such events as the Olympics have proved to be a major commercial event that many, including the tourism sector, want to benefit from. And they do.